For your ears only 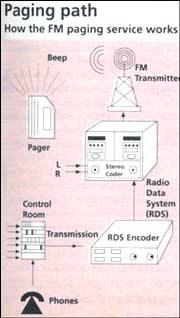 WHILE YOU may be tapping your foot to music on the All India Radio's I'm (Frequency Modulation) channel, the same broadcast band (87.5 - 108 MHz) may also be serving to contact a doctor required to attend to an emergency call. The I'm Radio Data System (RDS) - a paging service - is on the air.

To page a subscriber, a phone call to the paging service control room does the trick. The operator types the message into a computer, which is transmitted to the encoder - a device which receives the message in the binary code and transmits the same to the Very High Frequency FM transmitters. This binary code is radiated from the transmitter as a sub-carrier in the I'm broadcast band. But its frequency (57 Kilohertz) does not fall in the audible range for the human ear, and so does not interfere with the FM music channel broadcasts, explains S K Rajagopalan, assistant research engineer with AIR.

Each pager has an individual number or address called Cap code preprogrammed into it. The Cap code helps the pager to scan through the different radio frequencies and lock to the right signal.

The RDs does not require exclusive frequencies - it uses the idle capacity of the FM channel, which can transmit 1187.5 bits per second - and this, in turn, reduces the infrastructural costs, thus giving a low cost nationwide paging service. Registration for radio paging costs Rs 1,000 and monthly service charges vary with the type of pager used.

The @adio paging allows coverage of a 60 kin radius. Intercity paging is done via the control room operators who call their counterparts in the city where the service is available and the message is delivered to the particular pager number.

With 85 FM stations already in existence and another 140 on the anvil, the AIR appears determined to succeed in its plans to link up the country with a fast and efficient communication mode before the turn of the century.