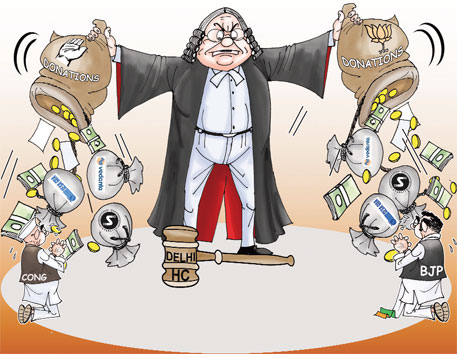 On March 28 the court held that the two political parties had “prima facie” violated the Foreign Contribution (Regulation) Act (FCRA) by accepting donations from Britain-based mining major Vedanta Resources and its Indian subsidiaries Sesa Goa and Sterlite Industries. The court directed the Ministry of Home Affairs (MHA) and the Election Commission (EC) to identify the foreign contributions and take action within six months.

A division Bench of the court made the ruling on a public interest petition filed in January last year by Association of Democratic Reforms, a Delhi-based trust working for electoral reforms, and E A S Sarma, a former secretary with the Central government.

The petition sought action against the two parties for allegedly violating foreign funding norms and illegally receiving contributions from government companies. The petition alleged that the Congress had illegally received Rs 1 lakh each from the State Trading Corporation and Metals and Minerals Trading Corporation of India, owned by the Central government. MHA and EC were made respondents for not taking action against the erring political parties.

Citing Vedanta’s 2012 annual report, the PIL alleged that the company made political donations to the tune of $2 million in India that year. “Sterlite’s annual report of 2011-12 also states that during the year, the group made political donations in India of Rs 5 crore, either through a trust or directly,” points out the petition. Based on the Congress and the BJP’s account statements to the EC, the petitioners argued that the parties are getting thousands of crores of rupees as donation, a bulk of which comes from foreign companies.

The petitioners said that political parties have been blatantly violating the Representation of People’s Act 1951, FCRA of 1976 and 2010 for the past few years. Section 29B of Representation of People’s Act prohibits political parties from taking donations from government companies and from foreign source, while section 4 of FCRA 1976 and section 3 of FCRA 2010 prohibit any financial contribution from a foreign source or company to a political party registered in India. Violation of the provisions is a serious criminal offence.

Vedanta Resources is a company incorporated in the UK and has its registered office in London. The petition says that according to FCRA 1976, the subsidiary of a foreign company is also treated as a foreign company. Hence, donations from Sesa Goa, Sterlite Industries (the two companies were merged in 2013 to form Sesa Sterlite) and Malco–all Indian subsidiaries of Vedanta–were also illegal.

The political parties concerned also violated provisions of the Income Tax Act by claiming tax exemption on the donations, says the petition.

“In 2012, I had made representations to the EC and MHA pointing out these illegalities, but the authorities did not take action,” Sarma says.

According to the petitioners, foreign companies give donations to political parties as quid pro quo for helping the companies violate laws, including those protecting the environment and safeguarding human rights of people.

The petition highlighted that Vedanta got environment clearance in 2010 for bauxite mining in Odisha’s Niyamgiri Hills, despite the Saxena Committee saying the project will possibly lead to statutory violations. The committee was set up by the Ministry of Environment and Forests. The petition also notes that iron mining by Sesa Goa in Goa has led to ecological destruction.

The two political parties have not denied receiving donations but have argued that they were not from foreign sources. They maintain that Sesa Goa and Sterlite are Indian companies since they were registered in India under the Company Act, 1956. They argue that though Vedanta is based in Britain, more than 50 per cent of its shares are owned by Anil Agarwal, a non-resident Indian. So donations from Vedanta, too, cannot be considered as foreign.

The court has, however, rejected these arguments. Interpreting FCRA 1976 and the Companies Act, 1956, the court held that Vedanta is a “foreign company”. As for Sesa Goa and Sterlite, the court observed that more than 55 per cent shares of these companies were owned by Vedanta. Under FCRA 1976, if more than one-half of the nominal value of the share capital of a donor company is held by “corporations incorporated in a foreign country or territory,” it will be considered a “foreign contribution”.

When the High Court asked the Union home ministry why it had not checked the foreign funding to political parties, the ministry said it believed Vedanta was an Indian comapny. The court, however, pulled up the ministry, observing that its response was “found to be based on a wrong understanding of the law”.

The government has now been directed to “relook and reappraise the receipts of the political parties and identify foreign contributions received by foreign sources as per law” and to “take action as contemplated by law”.

The High CourtÃ”Ã‡Ãªbench, in its verdict, pointed out that the primary objective of FCRA was to keep Indian politics away from the influence of foreign money. “Political parties and pliant public functionaries were influenced by foreign powers to toe their line and were in return handsomely rewarded in myriad forms, which included bribes, lavish hospitality, sponsorship of education of relatives in reputed universities abroad and attractive career opportunities in MNCs,” observed the court, stressing the need to check such violations.

The petition has appealed to the court to direct the Centre to “confiscate the illegal donations under the supervision of the high court”. It has also raised apprehensions that since Finance minister P Chidambaram was a director in Vedanta till May 2004, the government might not take any action against the group on its own.

“Till recently, he was the home minister and was responsible for implementing FCRA. He did not take action against Vedanta or the INC (Congress) with whom he is associated. He is now the finance minister under whose charge income tax exemptions are being given to Vedanta and the INC for the illegal donations,” the PIL said.

“The matter has now come under judicial scrutiny. We are particularly happy that our interpretation of the term ‘foreign company’, as defined in FCRA, has been accepted beyond doubt,” Sarma told Down To Earth.

He has written to chief election commissioner V S Sampath for immediate action. His letter, dated March 31, states that apparently Vedanta and its subsidiaries have also made donations to other political parties, including the Trinamool Congress.

“Vedanta has evidently set up a trust known as Public and Political Awareness Trust, specifically for making political donations. This is clearly an indirect way to channel political donations. It is doubtful whether routing political donations through an electoral trust complies with the provisions of FCRA. I understand that several companies have followed this modus operandi. A thorough investigation will reveal the goings on in these trusts which function in a highly non-transparent manner,” Sarma said in the letter.

Judgement: Judgement of the High Court of Delhi regarding political parties taking donations from Government Companies as also from a foreign source