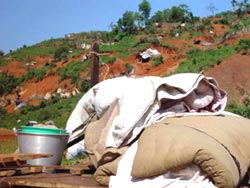 the extensive drive of the Union ministry of environment and forests (mef) to evict encroachers from more than one million hectares of forestland across the country by September 30, 2002, is facing stiff resistance in a number of states. The recent mef notification (see box: Highlights) could affect approximately 350 million people living in and around forests.

Civil society organisations working with tribal communities in Andhra Pradesh (ap) and Orissa are planning to launch an aggressive campaign against the orders. In Assam, the eviction drive has already been withdrawn after a meeting of chief ministers of the seven north-eastern states.

Though the notification makes a mention of the eviction of 'powerful lobbies' responsible for forest encroachments, the definition of 'encroachers' is open to various interpretations. ngos allege that this ambiguity has led to its misuse, in that members of local communities are being ousted instead of those indulging in illegal mining and felling. "It is an open conspiracy. As per the notification, the order should stick to 'powerful lobbies' only," says Ravi Pragada of Samatha, a Hyderabad-based ngo. This has also raised the hackles of communities dependent on forests. Out of 350 million people living in and around forestland, nearly 68 million are tribals, many of whom do not possess land rights and see the directive as yet another attempt to harass them. "The circular is a major threat to tribal groups involved in shifting cultivation like the Chenchu community in the protected areas (pas) of ap," alleges V R Sowmitri of ngo Committee for Community Forest Management, ap.

The notification is categorical about all forest encroachments, which were not regularised as per the September 1990 guidelines, being removed before the present deadline. The 1990 instructions issued by the mef allow resolution of disputes through regularisation of forestland occupied by tribals before the notification of these tracts as reserved forests. But ngos and local inhabitants claim that the regularisations were not carried out effectively. In spite of living on the forestland for generations, many tribals could not even get pattas (title deeds). "Irregularities in the regularisation process will now go against the indigenous communities who were denied possession at that time," says Rohit Jain of Sruti, a Delhi-based ngo.

The Supreme Court (sc) had asked the Union government to submit the status report of encroachments across the country as an intervention order in the T N Godavarman Thirumulpad case filed in 1995 (see Down To Earth, Vol 11, No 7, August 31, 2002). But, the mef is charged with carrying out evictions injudiciously without addressing the real issue. "The court only asked for the status report on encroachments, but the government turned it into an eviction order," says Jain. However, V K Bahuguna, inspector general of forests, mef maintains that the eviction is in consonance with the sc order.