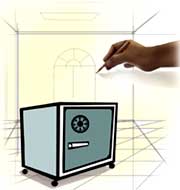 a recent Supreme Court (sc) order on monetary compensation for a forest that is cut for non-forest purposes has raised more questions than it answers. Is the Central fund that an earlier order wanted set up to collect this money even constitutionally acceptable? What are the custodial arrangements to set up the Compensatory Afforestation Management and Planning Authority (campa), the body that will control these funds?

"The order does not properly address the issues I raised in court," says constitutional lawyer K K Venugopal, referring to an earlier hearing in May 2005. Arguing on Kerala's behalf, he had said since campa lacked the authority of a law passed in Parliament -- and so, its audit could not automatically be entrusted to the Comptroller and Auditor General -- it is "in the teeth of the constitutional provisions to safeguard these monies". This means holding money in the fund is unconstitutional.

Most of the 70-page sc order issued on September 28, 2005 by Y K Subharwal, Arijit Pasayat and S H Kapadia, is in response to numerous affidavits concerning the basis for charging of net present value (npv) of forests and pleas for exemption submitted by various ministries, state governments and public sector undertakings. The order also calls for an expert committee to look into how to calculate npv. The main problem though, lies in what the order does not deal with.