Swamps of Western Ghats in danger due to human activities 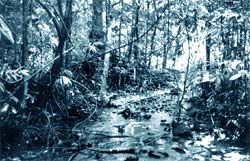 myristica swamps are one of the most unique ecosystems in the Western Ghats. They are called so as they mainly harbour species of the Myristicaceae family of flowering plants that provide nutmegs. Unfortunately, due to human activities, the swamps are today highly fragmented and hence threatened. Subhas Chandran, a lecturer at the Baliga College of Arts and Science, Karnataka, recently surveyed 51 swamps in the Uttara Kannada district of Karnataka and found that 17 have dried up; the fate of 21 others will soon be the same.

Another researcher, R Vasudev from the Forestry College, Sirsi, Karnataka, has ascertained that the population size of many flora species is alarmingly low. For instance, he could only spot 90 Semecarpus kathalekanensis trees . The swamps are the only place in the world where S kathalekanensis trees are found; if the swamps degrade, the species, which is a rich source of genes that can make plants/trees resistant to the adverse affects of flooding, will become extinct very soon.

The threat of extinction is not hyped up -- small population means less genetic variability, which leads to flora species becoming more vulnerable to diseases and pest attacks. Experiments conducted by researchers from the University of Agricultural Sciences, Bangalore, prove that seedlings of new S kathalekanensis trees have lower genetic variability than those of the adults (a feature indicative of progressive inbreeding).

As a result of the degradation, humans stand to lose much -- the plants/trees are potential candidates to mine for genes that impart resistance to anaerobic stress. Henceforth, steps should be taken to save the ecosystem. Before drawing up conservation plans, they need to be mapped. The former is an uphill task and requires the involvement of farmers and the 'cooperation' of forest officials. Furthermore, critically endangered species should be transplanted in other habitats.