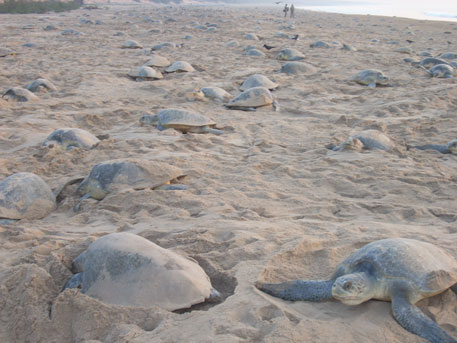 The government administration has assured forest officials of Bhitarkanika National Park and Gahiramatha Marine Sanctuary in Odisha that it will not engage forest guards in the forthcoming Lok Sabha elections.

“The vehicles, boats and staff of wildlife sanctuaries and national parks will also not be requisitioned for election duty. But forest officials who work in offices outside the forest areas will be engaged in poll work,” says Naba Kumar Nayak, additional chief electoral officer

“At present, forest guards are engaged in protecting the endangered Olive Ridley sea turtles on the beach and sea. They also patrol the sea to prevent illegal fishing by trawlers in Gahiramatha Marine Sanctuary. Protection is already a problem because the post of about 30 forest guards is lying vacant since long,” he adds.

Gahiramatha is the world’s largest rookery of the Olive Ridley sea turtles. The authorities have banned fishing in the marine sanctuary from November 1, 2013 to May 31, 2014. Since the ban was enforced, 150 marine fishers have been taken into custody, and 35 fishing crafts have been seized for unlawful fishing activity, a forest official says. On January 12, forest guards had to shoot down a fisher when a fleet of armed fisherfolk attacked two patrolling vessels, says a forest officer.

On March 17 last year, around 400,000 turtles laid eggs in Gahiramatha. Lakhs of turtles have already congregated near the beach for mass-nesting. “We need more forest guards,” the forest officer adds.

Sudhanshu Parida, environmentalist and secretary of the district unit of People for Animals, says shortage of forest guards can attract poaching and illegal fishing. During summers, spotted deer, wild boars and other animals venture into human habitat and become vulnerable. Forest guards are essential here, he says.

“We requisitioned staff of all government departments, including the forest department for poll duty. If the forest officer is not wiling to allow us to engage any forest guards in election work, then we will not force them,” says Ratnakar Rout, collector, Kendrapara.