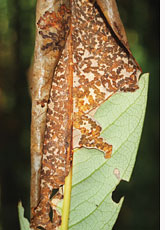 rampatre, a non-timber forest produce and an important livelihood source for communities in the Western Ghats, is afflicted with a mystery infection. Scientists are yet to find the nature of the infection or measures to control it.

"The disease started in Shimoga district, Karnataka, and is moving further north," said R Vasudeva, associate professor at the College of Forestry at Sirsi, Uttar Kannada. Preliminary survey shows 15-20 per cent of the tree population could be affected. Vasudeva says it could be a bacterial infection but admits there is no study to ascertain that. According to him, the tree gets infected easily and it dries up, with partially ripened fruits left hanging.

The fruit of this plant is often used as alternative to nutmeg. Nutmeg, commonly know as jaiphal, is used extensively in Indian cooking. Besides, rampatre (Myristica malabarica) is also known for its medicinal properties. Its aqueous extract has antioxidant properties. A study published in the Journal of Pharmacy and Pharmacology (Vol 59,No 11, November 2007) says the extract of rampatre can heal stomach ulcers. Locally, it is used to cure cough and muscular pains.

The myristica species is also threatened by habitat degradation and is categorized as vulnerable in the iucn Red List of threatened species. Over-harvesting and premature harvesting have led to low seed viability. Scientists believe the species could have reached the 'endangered' level and call for a proper assessment to look into the matter.