On August 1, 2003, Madhya Pradesh made a plea in the Supreme Court seeking a fund-generating mechanism for forest protection. Earlier, in June, Himachal Pradesh and Arunachal Pradesh asked the Union government to provide them annual reimbursement amounting to Rs 200 crore and Rs 250 crore, respectively, for not being allowed to sell timber 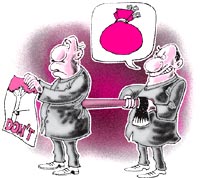 on august 1, 2003, Madhya Pradesh (mp) made a plea in the Supreme Court (sc) seeking a fund-generating mechanism for forest protection. Earlier, in June, Himachal Pradesh (hp) and Arunachal Pradesh (ap) asked the Union government to provide them annual reimbursement amounting to Rs 200 crore and Rs 250 crore, respectively, for not being allowed to sell timber. The two developments have given fresh impetus to the 'compensation for conservation' demand -- a long-standing claim pressed by India's forest-rich states to pull their economies out of the woods.

The idea took root a few years after the sc's 1996 order, banning the felling of trees at an altitude of over 1000 metres in Himachal Pradesh, Jammu and Kashmir, West Bengal and Uttaranchal. This was followed by another major apex court directive that prohibited felling in the Northeast and transportation of timber from the region to any other part of the country. The judgement was one of the many delivered in the T N Godavarman Thirumalpad versus Union of India case, which was filed in 1996.

"The curbs on tree felling resulted in an increase in forest cover which, in turn, spawned several environmental and ecological benefits," points out Kanchan Chopra, professor, Environment and Resource Economics, Institute of Economic Growth, New Delhi. At the same time, states that banked on timber trade and other forest-related industries incurred heavy revenue losses.

The Northeast region was the worst impacted as it witnessed a drastic drop in returns. A case in point is Arunachal Pradesh whose income nosedived by 84 per cent within five years of the ban being enforced. It was then felt that the situation was ripe for recompensing states with dense forest cover. Significantly, today the forest cover in the country stands at 20.55 per cent of the total area while it is higher in states such as ap (81.25 per cent), Mizoram (82.98 per cent), Uttaranchal (44.76 per cent), hp (25.79 per cent) and mp (25.07 per cent). The national target set by the government is to have 25 per cent land under forests by 2007.

"Forested states should be compensated for foregoing revenue from forest-based industries," asserts an mp government official. "What we are asking for is some kind of an allocation on the basis of ecological criteria, wherein states with larger forest cover get more funds," adds the official. Bivash Ranjan, assistant inspector general of forests, Union ministry of environment and forests (moef), concurs: "The money should be given as a reward to forest-rich states for steps taken to preserve the ecology."
The sc appeared to have taken cognisance of this growing sentiment when it passed a judgement in September 2000. It directed the Union government to set up a committee comprising the Union finance secretary, moef secretary and chief secretaries of all states to discuss the matter. The court wanted to know why regions deficient in forests shouldn't be asked to contribute towards preservation of the existing green cover. It also told the panel to look into the merits of providing incentives to forest-rich states for preserving and regenerating woodland.

With practically no state willing to shell out 'greening charges', the panel opined that such a move might not be feasible. In January 2001, the sc issued a notice to the Union government. The apex court noted that if forest-deficient states were unwilling to make a financial commitment, the Union government itself could bear the expenses of maintaining the green cover -- as stipulated in Article 48 (a) of the Constitution.

A year later, amicus curiae Harish Salve suggested to the sc that a 5 per cent cess be imposed on the import of wood and wood products, including pulp, which could be distributed amongst forest-rich states as compensation. "The moef endorsed the recommendation and requested the finance ministry to do the needful," claims an environment ministry official.

But the moef, Planning Commission and finance ministry have so far failed to evolve a consensus on the modalities of the proposal, with the latter not favouring the levy. The states, too, are required to send their approval to the moef in this connection. According to Salve, "Till now, Madhya Pradesh has given its consent." Arunachal Pradesh's principal chief conservator of forests, S R Mehta, also responds affirmatively: "The move will discourage deforestation and spur the state into bringing more area under tree cover."

A senior official of the Planning Commission reveals that the moef is in the process of working out a "detailed scheme". Pronab Sen, advisor (prospective planning), Planning Commission, explains: "For the purpose of compensation, states need to be ranked in terms of their forest cover." The money can then be allocated according to the density of forests in different regions.

Indeed the plan panel, while allocating funds under the 10th five-year plan, has taken care that forest-rich states get a greater share. Ranjan mentions the Union government's integrated forestry scheme, which accords similar priority to such states. About Rs 25 crore has been set aside for different states under the scheme. "This is insufficient," stresses the mp government official, adding: "We need more funds under the specific head of maintaining our large forest cover and to make good our losses." Sen discloses: "The commission will soon release a position paper on the issue."


Experts aver that alternative plans should be chalked out post-haste to augment incomes and overcome the shortfall in revenues due to the felling ban. The dithering Indian authorities can take the cue from Brazil where local governments have been encouraged to preserve and improve their ecological resources (see box: Rich harvest).

"The government should encourage plantation of pulpwood on wasteland. In 10 years, India will be self-sufficient and can export the surplus. The money obtained can help offset losses incurred due to timber trade restrictions," avers N C Saxena, former secretary, Planning Commission. Saxena opines that instead of asking for compensation forest-rich states should look towards such avenues to generate revenue. "Forests are not an obligation but an asset. They are preserved for the benefit of local people. Rather than destroy forests or depend on compensation, state governments can maximise returns through sustainable means," emphasises Saxena.

It may be noted that the Arunachal Pradesh government is promoting the marketing of non-timber forest produce (ntfp) such as cane and bamboo. To make raw material available to local people, the government has banned the export of cane. The state has also tied up with United Nations Development Programme (undp) and International Bamboo and Rattan Organisation (inbar) for promoting ntfp.

In addition to this, it is encouraging cultivation of fruits such as apples, oranges and pineapples through horticultural plantations. But making a case for an early resolution of the compensation issue, ap's former chief minister, Mukut Mithi, argues: "The current investments will only bear fruit after a considerable period of time."

Madhya Pradesh -- which, along with some other state governments, has put across its point to the 12th finance commission -- is also hoping for a speedy settlement. "We only want what we are entitled to," claims the mp government official. An moef official admits that the matter needs to be sorted out soon. While the Union government is yet to see the wood for the trees, all eyes are on the sc with regard to the final disposal of the case.