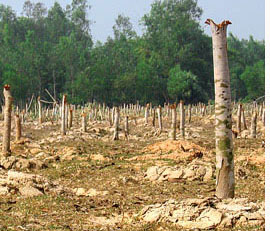 tribal villagers in West Bengal's West Midnapore district chopped down around 6,600 young eucalyptus trees on a six-hectare state forest department plantation recently. The residents claim the land in the district's Chandra forest range is theirs and they want it back. Forest department officials rubbish the claims and are preparing to slap legal charges on the villagers.

"Our forefathers cleared and levelled the land and grew crops," says Subhadra Naik, whose husband, Bansi Naik, has been leading the tree-felling charge (see box: Grey areas). "In 2001, officials asked for land along the fringes of our fields. 'Just the width of the hem of your sari,' they said. We agreed. Then they took our thumb impressions on some papers and by 2004 they took over all our land," she alleges.

The villagers of Khorikashuli, comprising mostly Lodha tribals, used to grow multiple crops on the land, which they say, provided them with enough food for at least six months a year. In the early 1980s, the local Lodha development agency, a wing of the centre's Integrated Tribal Development Agency, installed four wells on the land to help with irrigation. The wells are still functional with water at a depth of eight or nine feet.

The eucalyptus plantation started in 2004 as a joint forest management scheme funded by the Union Ministry of Environment and Forests. Under the scheme, every family in the village would receive 25 per cent of the cash earned from selling the trees after harvests 10 years later--2014. But the villagers say they cannot afford to wait that long. "Eucalyptus doesn't give us food. For several years my family hasn't been able to eat properly," says Helu Doloi, a resident.

The tribals say they are reclaiming the land under the provisions of the Scheduled Tribes and Other Traditional Forest Dwellers (Recognition of Forest Rights) Act, 2006. That the act, which recognizes the land rights of forest communities who don't have documentary proof of ownership, hasn't been implemented yet, doesn't faze them. Villagers say the wells installed in the early 1980s prove they had been cultivating the land prior to that. The Forest Conservation Act, which came up in 1980, is the cut-off mark for regularizing encroachments.

The forest department is preparing to file illegal felling of trees and breaking of land charges against 30-35 villagers. Officials insist that the land belongs to the department. According to forest department records, the land was deemed protected forest in 1969. However, it was first surveyed in 2003. "We never used force to take the land," says V K Yadav, conservator of forests, western circle.

"The area had been encroached upon and some farmers were cultivating it. We convinced them, through a series of discussions, to give up the land for plantation," he says. "The trees were raised by the villagers themselves through their forest protection committee, through funds disbursed among them. Many of them got employment on the plantation and many still want the plantation to remain. If some villagers had a problem, why didn't they come and talk to us first? And how come they never complained all these years?" he asks.

The incident, Yadav says, is a pre-panchayat poll gimmick. He claims Sukumar Bhunia, a local Forward Bloc leader, had brought in armed thugs on motorbikes on November 27 and December 5 and 12--the three days the felling operation was conducted. The Forward Bloc, part of the ruling Left Front alliance in West Bengal, has announced it will fight the local panchayat polls alone in 2008. Bhunia, however, denies the allegations. "I started the campaign to return villagers their ancestral lands at Hetasole, 7 km from Khorikashuli, two years ago," he says, pulling out news clippings of 2005 to prove his point.

Bhunia says that in the past four years the state forest department has taken over large tracts of land under the pretext of social forestry projects. Official records verify this claim. According to a 2002 mo ef report, the total area under encroachment in West Bengal was 16,940 hectares (ha), while state forests department records for 2005-06 show encroachment at 13,300 ha. Forest rights activists say social forestry has failed in West Bengal and land should be returned to the villagers. "If we didn't intervene, this place would turn into another Amlasole (also in West Midnapore) where villagers died of starvation in 2004," Bhunia says.

Forward Bloc is planning similar reclamation drives in the rest of the state to force the centre into implementing the Forest Rights Act by early 2008. "If the forest department files charges against the villagers, we will file a countercharge asking how they could take over land being used by tribals before first settling their rights," says Bhunia.

Given the union government's delay in implementing the Forest Rights Act, incidents such as the one in Khorikashuli are bound to happen, says Madhu Sarin, a Chandigarh-based policy analyst on natural resource management. She adds that the Lodha tribespeople are the most marginalized lot in West Bengal and according to the Forest Rights Act, they have a right to the land if they have been cultivating it before 1980.