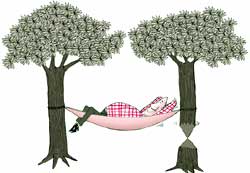 The ill-funded mismanagement of the world's forests is likely to continue for at least another year. The reason:the United Nations Forum on Forests (unff) has missed its target of delineating reforms for promoting their management, conservation, and sustainable development. The fifth high-level ministerial meeting of the body (unff-5), held in New York recently, had a mandate to revitalise the ailing forum. But participants couldn't reach a consensus on the declaration text. Some progress was achieved on the debate on financing sustainable forestry and a consensus was reached on the issue of a legally binding forest agreement. However, none of what nations debated can be considered concrete in the absence of a formal declaration. unff-5 has decided to revisit the contentious text of the declaration at unff-6, to be held in February 2006.

For over a decade, the eu and other major timber importing nations have pushed for a legally binding agreement to make nations adopt sustainable forestry practices. Global conservation group wwf International says the long-standing stalemate over the issue has distracted unff from working on even the agreed upon goals.
No legal shackles

For over a decade, the eu and other major timber importing nations have pushed for a legally binding agreement to make nations adopt sustainable forestry practices. Global conservation group wwf International says the long-standing stalemate over the issue has distracted unff from working on even the agreed upon goals. At unff-5, the eu initially stuck to its traditional stance, saying that the present non-legally binding system had failed to "translate global dialogue into action on the ground". But developing countries like Brazil and India argued that forests were national assets, not global resources, and a legally binding agreement would infringe on their sovereignty. By the end of the meet, the eu relented and a provisional consensus was achieved. It was decided that discussions on a legally binding framework will be held only in 2015. Till then, talks will focus on developing a voluntary code of conduct for sustainable forestry. However, since the meeting did not come out with any formal declaration, the decision remains vulnerable to further changes.

The meet also witnessed considerable debate over funding. Many countries criticised the unff's failure to galvanise the political will to generate finances for sustainable forest management (sfm). The g-77 group of developing nations and China stressed on the need to "identify predictable funds for sfm". J V Sharma, an official of the Union ministry of environment and forest , who was part of India's negotiating team, said talks about a legally binding instrument would be premature in the absence of adequate funding mechanisms. "India has a National Forest Action Plan , which outlines what we need to do to achieve 33 per cent forest cover. The problem is funding." Against the estimated annual expenditure of us $1.2 billion to meet the target, the fund availability is a mere us $350 million.

Participants agreed that the Global Environment Facility, the largest single source of finance for the environment, was inadequately financing sustainable forestry projects. But they couldn't agree on how the unff could mobilise funds. They entertained several ideas, including creating an sfm implementation fund under the un Food and Agriculture Organization's National Forest Programme Facility. A more contentious proposal, opposed by the us and the eu, was to create a new global forest fund under the unff.

A minor success of the meet was a consensus that the foreign aid for forest conservation, which countries receive in the form of Official Development Assistance (oda), should be increased. oda towards sustainable forestry has constantly declined since the 1990s, according to the World Bank's Programme on Forests. Other forms of bilateral and multilateral assistance have also followed the same trend.


Frustrations regarding the unff process have been high since it started in 2000. A major cause of this has been its inability to accelerate the implementation of internationally agreed sustainable forestry practices proposed by the Intergovernmental Panel on Forests/Intergovernmental Forum on Forests. These proposals were the culmination of five years of international deliberations. But the unff secretariat found that by 2004, most countries had not even decided whether or not they would implement them. The eu had predicted that unff-5 would be the "turning point in global forest policy". But this was not to be. Delegates at the meet decided that to ensure that the forum is focused, it should be reorganised into a multi-year programme of work with two-year cycles, each cycle focusing on different thematic areas. But again, there was disagreement on whether the forum should continue meeting globally, or hold regional meetings instead.