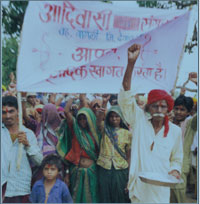 PEOPLE belonging to the Bhil and Bhilala tribal communities in Madhya Pradesh’s Alirajpur district are protesting flawed implementation of the Forest Rights Act. They said the government is not screening their claims to forestland. Committees at the village, sub-divisional and district levels are supposed to verify the claims submitted by the tribal people/forest dwellers. “But 35,000 forest deeds were distributed on the basis of forest records dating back to 1992- 94,” said Rahul Banerjee of the nonprofit, Khedut Mazdoor Chetna Sangath. The tribals are now planning to send a petition to the sub-divisional magistrate, demanding an explanation. Tribal people in the district have filed 300,000 claims after the law came into force in January 2008. But the authorities have not bothered to inform people whether their claims have been accepted or rejected. This means they cannot appeal against rejected claims to higher authorities, Banerjee said. There are rumours that the government may announce 2010 as the deadline for implementing the law and tribals fear they may get evicted. Alirajpur has a high tribal population estimated to be around 100,000. Bhils and the Bhilalas are the dominant groups among them.