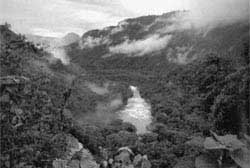 • Three countries - Russia, Canada and Brazil - house more than 70 per cent of the world's remaining frontier forests and half of this lies in the far north where resource-extraction costs are high.

• The most threatened acreage includes all of Europe's frontier forests and 87 per cent of those in Central America.

THESE are the salient points of the first scientific assessment of the state of the world's forests conducted by the us-based World Resources Institute (WRI) and released on March 4 at Washington, US. The report, Last Frontier Forests: Ecosystems and Economies on the Edge, records the forest loss over the past 8,000 years and graphically depicts the effect of human intervention on the forests.

Using state of the art geographic information systems (GIS), the report focuses on the earth's frontier forests, which are the last major tracts of undisturbed forests and are likely to survive indefinitely if there is no human intervention. The report, which has been prepared in consultation with 90 top forest specialists of the world, is part of WRI's five-year programme - Forest Frontiers Initiative - to save the remaining frontier forests in Canada, Russia, the north-Amazon area, the Guyana Shield region of South America and Africa's Congo basin. Says WRI senior associate Nigel Sizer, a forest policy expert, "With the right information, action can be taken by policymakers, private-sector loggers, forest product manufacturers and consumers, to manage all the world's forests responsibly and meet everyone's needs."

The frontier forests are important as they are home to many of the world's indigenous cultures and are also refuges for global biodiversity. About 65-75 per cent of all plant species found in Brazil, Indonesia and Papua New Guinea, which are high-biodiversity regions, are estimated to be found in the frontier forests of these countries. They store a tremendous amount of carbon dioxide - at least 433 billion metric tonnes -that might otherwise become a potential greenhouse gas.

In order to rank nations according to the percentage of frontier forests that they have lost and the proportion of remaining frontier forests that is threatened, the WRI developed a frontier forest index. According to this, all of North Africa and the Middle East and nearly all the countries in Europe - 76 nations in all - have lost the forests completely. Another 11 nations are classified as being on the edge, with only five per cent or less of their frontier forests surviving and all of it threatened. "The critical point is that the countries whose forests are in a good condition - Canada, Russia, Brazil, Venezuela, Columbia, Guyana, Suriname and French Guiana - offer a tremendous opportunity for responsible forest management," said Sizer. "With a turnaround in policy, these countries have a real chance to keep most of their original frontier forests," he added.