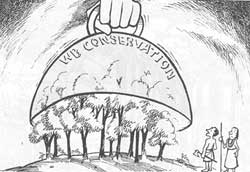 A PROPOSED forest conservation programme in Thailand has met with fierce resistance from non-governmental organisations, academicians and forestry officials who feel the project may dislocate forest dwellers.

The $93-million Conservation Forest Area Protection, Management and Development Project is to be funded partly by a Global Environment Facility grant of $20 million. Additional financing will come from the Thai government and the World Bank, which emphasises the need to protect "core" biodiversity areas through demarcation and buffer zones.

The programme will be initiated in the Huay Kha Kaeng and Thung Yai Naresuan wildlife sanctuaries in western Thailand. The forests cover 600,000 ha, forming the largest protected area in mainland southeast Asia, and are home to a large variety of animals that are endemic to the region, such as wild buffalo, tiger and clouded leopards.

However, many doubts about the project have surfaced. A World Bank document talks of "decriminalising" forest dwellers and integrating them into the mainstream of society. This has triggered fears that emphasis will be laid on resettlement.

Dave Hubbel of the Thailand- based Project for Ecological Recovery points out: "The Bank document erroneously targets the livelihood activities of small-scale farmers, tribals and forest dwellers as the most serious threats to biological diversity, while failing to recognise the destruction caused by the construction of dams and roads, mining and tourism."

And, Weerawat Theeraprascrt, chief forest warden of the Thung Yai Naresuan sanctuary, contends: "Actual conservation of biodiversity will happen only in direct cooperation with the people dwelling in forest areas."

Another fear is that the knowledge of the forest dwellers will be used to identify genetic material that can be developed into commercial products.

However, some experts believe that the programme offers the only hope of protecting fast-disappearing plant and animal species. "We have about 5 per cent of the world's species of flowering plants, but have declared only 200 species as protected under the law," says Lart Chanthanaparb, head of the programme's biodiversity section and professor of forest ecology at Bangkok's Kasetsart University.