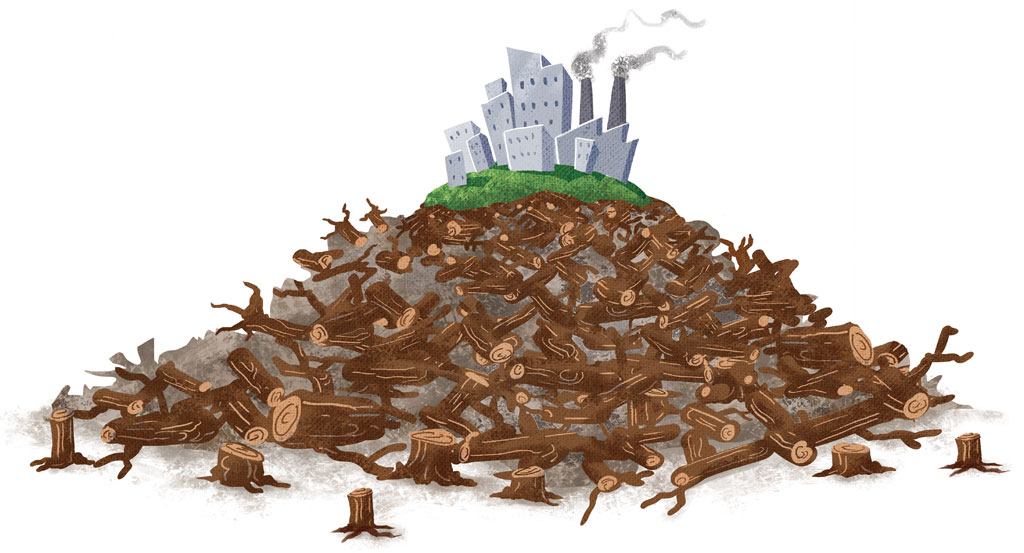 India's long and confused chase on how to compensate the forests diverted for development projects just got a bit more complex. Notwithstanding a rare political consensus. Recently, the Parliamentary Standing Committee on Science and Technology, Environment and Forests (PSC) submitted its report on the Compensatory Afforestation Fund Bill, (CAF) 2015, giving wide ranging suggestions to the contentious proposed law. More to it, committee chairperson Ashwani Kumar, a Congress member of Parliament, demanded immediate adoption of the bill. “We are concerned that over Rs 38,000 crore is lying unutilised under this account and The Compensatory Afforestation Fund Bill, 2015 should make its way in the Budget session of Parliament,’’ he said.

The CAF bill has always been articulated as a law to unlock the money deposited by companies/entities taking over forest lands for afforestation work. However, 11 years after the Compensatory Afforestation Management and Planning Authority (CAMPA) was set up by the Union government, problems continue to plague the compensatory forestry regime (see ‘Pushed to act’). Unfortunately, the recent PSC report has not only missed many critical issues ailing the CAF regime but also made some alarming recommendations. This is worrying because CAF 2015 already has too many lacunae to be plugged. For starters, the bill is weaker than the CAF 2008 bill, which is loosely adapted into the 2015 bill. New Delhi-based non-profit Centre for Science and Environment (CSE) says CAF 2015 is less participatory than CAF 2008, it has no time frame for creating compensatory forests, and is highly bureaucratic in operations (see ‘Getting worse with time’).

While the PSC report has addressed certain critical lacunae in CAF 2015, the report has faltered in many others. It suggests reducing the share of National Fund, a corpus in CAF 2015 to fund the proposed National Authority, from 10 per cent to five per cent. This means states will have more funds for afforestation activities. It also prohibits the use of Compensatory Afforestation Funds, accumulated in the ad hoc CAMPA (a temporary body set up in 2006), for the Green India Programme, noting that it is a separate programme of the government having its own budgetary allocation. Green India Programme is a national commitment of creating additional forest assets to mitigate climate change, which is in sharp contrast to compensatory afforestation that does not create additional forests.

The PSC report also recommends the use of native species in plantations and broadening the scope of environmental services (including pollination and seed dispersal). The report seeks clarity on “infrastructure development, supply of wood and other forest produce saving devices and other allied activities” in the bill to avoid ambiguity and misuse. It also recommends “voluntary relocation from critical wildlife habitats” which will help address this long standing issue ailing India’s wildlife sector. The recommendations of including “ministries of Space and Earth Sciences” in the governing body of the National Authority and including an expert on tribal affairs or a representative of tribal community in national and state authorities will make these bodies more representative and sensitive to tribal concerns. The report also prescribes a time-bound approval (within three months) of annual plans received from the states/union territories (UTs) by the National Authority, which will expedite the afforestation activities on the ground.

Currently, private user agencies are mandated to provide non-forestland equal in extent to the area of the forestland proposed to be diverted. Where non-forestland is not available or available in lesser extent to the diverted forest, compensatory afforestation must be carried out over degraded forests twice in extent to the diverted forestland (or twice the difference in case of a mix). Against this background, the PSC report makes an alarming recommendation that “in order to meet the situation where enough land is not available for afforestation, specific provisions should be made in the bill for encouraging densification and revitalization of available forests closest to areas where deforestation is considered unavoidable on account of critically important national projects. 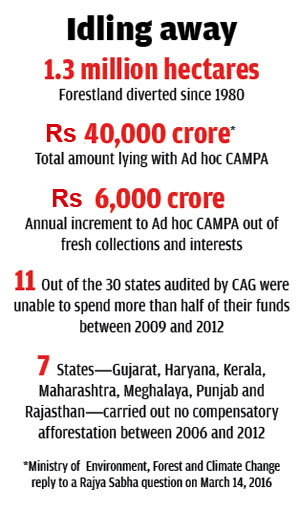 Thus the bill should contain provisions emphasizing the same.”

This indiscriminate recommendation can be misused by forest authorities to divert forests on the pretext of “densification and revitalization of available forests” with no implied liability to compensate diverted forests. Given the poor track record of the forest departments of letting forests degrade over decades, such a relaxation in land acquisition process put forth by PSC seems outlandish. It will enhance forest degradation and worsen irresponsible forest diversions. This clause also has the potential to curb the implementation of the Forest Rights Act, 2006, especially when many forest communities are waiting to get rights. It can also be misused to reduce India’s overall forest cover by restricting compensatory afforestation.

CAF 2015 has several other problems that need to be plugged for compensatory afforestation to be effective. CSE, which recently analysed the proposed bill, has found several flaws in it. It says that a look at the CAMPA annual plans of operations from states reveals a meagre 20-40 per cent allocation for afforestation activities.

The bill mentions “investment” of funds, which is not the original purpose of CAFs. It fails to provide specific periodicity for revision of net present value (the current value of a forestland). CAF, which promises to provide sustainable development, is also silent on the issue of community involvement. It prescribes a heavily bureaucratic institutional arrangement without significant public/community participation. Worse, the bill is silent on the much-needed social or environmental audit process too.

So what can be done? Ecologically speaking, forests once cut cannot be compensated entirely, at least for centuries. Despite this fact, India’s forests, which are spread over a quarter of its land area, continue to be diverted for industries and development. Since the enactment of the Forest (Conservation) Act, 1980, the government has diverted over 1.3 million hectares of forests. While a complete ban on forest diversion is difficult, considering the immense development pressure, the government must develop healthy compensatory mechanisms. 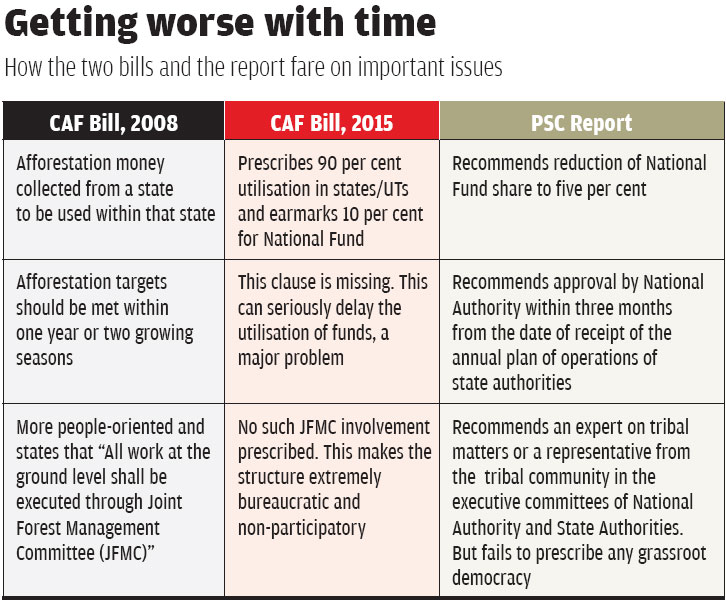 The bill should be based on the principles of healthy forest regeneration and equitable benefit sharing between the government and the local communities. CAF should be used for diversifying livelihood options, including farm forestry, strengthening eco-sensitive zones and promoting community conserved areas. CAF money must also be used to strengthen forest democracy by making communities participate in afforestation activities. This will speed up forest restoration, revive the livelihood base of forest-dependent communities and help build a long-term people oriented forest economy in the country. In fact, activities under CAFs have the potential to generate employment to rural people, similar to the Mahatma Gandhi National Rural Employment Guarantee Act, and create permanent green assets for the poor for long-term ecological and economic sustainability. Ensuring the survival of planted stock must also be ensured. Given the huge financial resource, this opportunity should be used to design an integrated long-term national forest action plan in consonance with national and people’s needs.

While it is true that the recent PSC report has suggested some positive changes in the bill, it has also suggested some that can lead to large-scale corruption and forest losses. Parliament should review the PSC report cautiously—incorporating only the positive suggestions—and act soon to avoid further degradation of forests.