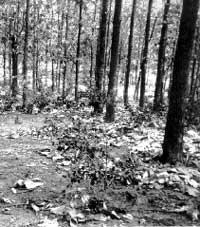 Japanese consumers are a wasteful lot. Trees felled in Asian rainforests are dumped as old furniture after a few years of use by the Japanese. A study conducted by the Sarawak Conservation Campaign (scc), an ngo, links the wasteful consumption patterns in Japan with the depletion of South Asia's tropical jungles. Environ mentalists are concerned that this wastage will increase until the cost of timber reflects the damage done to the environment by logging.

According to the group's survey, almost 60 per cent of burnable trash collected daily by city authorities in Japan consists of cheap wooden furniture made from tropical timber. "These findings prove that the Japanese buy and discard their furniture easily because the products are so cheap. This wasteful pattern devastates precious forests in other countries," says scc head Kazuko Matsue. When families in big cities shift their residence, they discard their large furnitures to save on moving costs. In Japan, it is cheaper to buy new furnitures than to pay the movers.