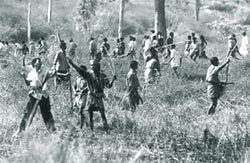 kerala chief minister A K Antony has just had a good public relations week. He met Prime Minister Atal Bihari Vajpayee in New Delhi, smiled at the cameras and announced that the Union government had given positive signals about releasing about 12,000 hectares of vested forestland in Wayanad district for distribution among the state's landless tribals. After all the bad press he got over the police firing on landless tribals in February in Muthanga (see: Stabbed in the back, March 15, 2003), he badly needed the publicity.

In real terms, however, all that Antony could extract out of the Union ministry of environment and forests (moef) was a commitment to send a team of experts to Kerala for an "on-the-spot study". The 1971 Kerala Private Forests (Vesting and Assignment) Act allowed the state to take over private forests and distribute them to the landless. But as per the Forest (Conservation) Act passed in 1980, the Union government can allow distribution of forestland only if the concerned state had made such a request before 1980, which Kerala had not. The state is now contending that the 1971 law is in itself a request.

According to a Kerala forest official, less than two per cent of the state's population is tribal. If the moef grants a concession to Kerala, it would have to entertain similar requests from other states with tribal populations. The Supreme Court has already ruled that a vested forest be treated as forest.