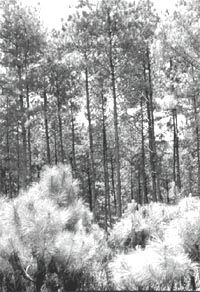 using forests and soil as 'sinks' may not help industrialised countries in search of cheaper alternatives for reducing greenhouse gas emissions. Two scientific studies conducted on pine forests in usa, present evidence that estimates of increased absorption of carbon dioxide as its concentration rises in the atmosphere are unduly optimistic.

It was widely claimed that with increasing levels of carbon dioxide, plants absorb more of it through photosynthesis. This process is termed as carbon dioxide fertilisation. The authors of the two studies, carried out at the scale of a forest stand in the Duke Forest, North Carolina, us , however, have proved otherwise.

The first study demonstrates that soil fertility can limit the amount of carbon dioxide absorbed by trees, no matter how enriched with carbon dioxide. The second study conducted on the same site suggests that forest soils are unlikely to play a significant role, as a reservoir of carbon dioxide, in retaining the gas for long periods.

In 1994, an experimental area in a 11-year-old loblolly pine plantation was fumigated with carbon dioxide to increase concentration levels to 550 parts per million by volume (ppmv). Present atmospheric concentrations of carbon dioxide in ambient air are taken at about 365 ppmv. In the initial three years, trees in the experimental plot showed an average 34 per cent increase in carbon dioxide absorbed relative to an adjacent plot that was not fumigated. But this increase declined to six per cent over the next four years.

In the second study, initiated in 1996, soil samples collected after three years of tree growth at elevated carbon dioxide levels did not show any carbon accumulation in the deeper layers of mineral soil. Stored carbon stays longer in deeper layers at a depth ranging from 15-30 cm. On the other hand, the litter layer -- layer of dead plant material on top of the mineral soil -- showed high accumulation. Carbon stored in this layer is not very stable and can be released back to the atmosphere in just about three years. "Such findings call into question the role of soils as long-term carbon sinks, and show the need for a better understanding of carbon cycling in forest soils," say authors of the study, William H. Schlesinger, Duke University and John Lichter, Bowdoin College, Maine.