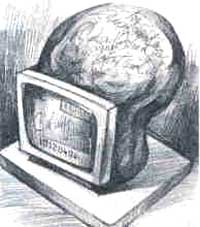 IF FRAUDSTERs have devised ingenious ways to dupe banks and financial institutions of millions of dollars each year, then scientists trying to combat forgery have certainly not lagged behind. Recently, British researchers unveiled the latest, state-of-art electronic signature verification system that uses neural network technology to detect forgeries with 95 per cent accuracy, and that too, in just 2 seconds.

The neural network computer technology imitates a human brain - it is capable of learning from its experience. Countermatch's neural networks learn to recognise the unique aspects of a person's signature for comparison on future signing occasions. "This could be a break-through in a wide range of security applications, from preventing cheque frauds to catching out cheats signing on for doles," says an AFA spokesperson.

The Countermarch package provides a secure, unbiased, automated way of checking signatures as they are being written, eliminating the risk of human error. Explai'As Graham Hesketh, AEA'S neural computing specialist, "It is inherently more accurate than the human eye with a 95 per cent accuracy rate. Verification takes I to 2 seconds and the matching process uses both position and timing to advise whether the signatore is genuine or forged."

Countermarch, say researchers, can be employed in most areas currently using computer passwords, personal identification numbers or identity cards. It can also be used in the health and safety area to check s0atures of plant personnel or even train drivers, they add.