Forget Internet and start from scratch, say US scientists 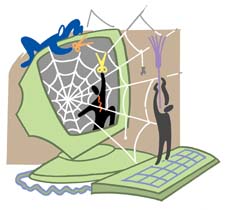 Has the time come to scrap the Internet and start anew? Some think so. Internet is 40-plus and growing. It faces many challenges today in terms of connection speed and data storage. Increasing mobility of devices and a lack of security threaten the reliability of the network. Scientists in the us are courting a new approach--clean-slate projects--to meet these issues. Initiated by some universities, the projects aim at revolutionising the Internet by starting from scratch. "Any large and successful network needs to be updated from time to time. The question is whether this should be achieved through evolution or revolution," says Dipankar Raychaudhuri of Rutgers University, New Jersey, usa, who oversees some such projects.

Institutions like Stanford, Rutgers and Princeton have started projects on new network structures.The National Science Foundation (nfs) of the us, which aids the project, plans to set up Global Environment for Networking Innovations (geni), a research and testing facility. Construction on geni could start by 2010 and take about five years to complete. Clean-slate researchers want to redesign the system to easily accommodate future technologies. The European Union also backed such initiatives through a programme called Future Internet Research and Experimentation. A project of this magnitude needs huge sums of money. Raychaudhari expects it to be shared by service providers, access network owners and end-users, who will benefit from the research.

A new form of Internet raises questions about its characteristics. So far, Internet has been open and helped people interact. Will the new design also promote this? Raychaudhari is optimistic. "Internet's success largely depends upon it being global and open. Any new design is likely to be the same and may even add features to make things even more democratic and decentralised." Designers of the current form of Internet had worked upon trust. Today, spammers and hackers make any move risky, they say. The projects are in infancy, still researchers hope for a clearer future.