Formation of stars linked to evolution of life on earth 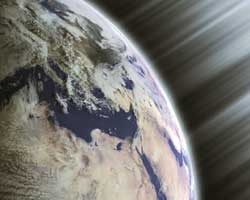 gear up to go back in time, approximately 2,400 million years ago, when there was frenzied star-making in the Milky Way. The frenzy has a link with formation of life on Earth. Science has discovered that the bacterial count of the seas at that time soared. Such productivity has not seen before or ever since. The study also dispels the generally-accepted notion that a warm climate is life-friendly and a cold climate, unfriendly.

While studying productivity of life during the formation of stars in the Milky Way, scientists noticed that the biggest fluctuations in productivity coincided with high star formation rates and cool periods in Earth's climate. Conversely, when the rate of star-formation was low, cosmic rays were less intense and earth's climate was warmer and the biosphere was almost unchanging in its productivity.The findings of the research conducted at the Danish National Space Centre were published online on October 16 in the Dutch journal Astronomische Nachrichten.

Records show that in all icy epochs, the biosphere experienced exceptionally high productivity. The explanation for this, according to the scientists, is that a huge temperature difference exists between the sub-polar region and the tropical region. This enhances surface winds that stir oceans and its nutrients. By stirring the oceans they improve the supply of nutrients in the surface waters, for which productivity goes up. This goes up in a warm climate.
The present study was triggered by the link between cosmic rays and cloud cover. In a separate study published in March 2001 in the Astrophysical Journal, a link between cosmic ray and cool and hot periods was established. It then struck the scientists that there could be a link between cosmic rays and evolution of life on Earth because cloud cover and cool and hot periods are related to formation of life on the planet.

Experiments carried out earlier prove that when the Solar System moves close to the supernova (where stars are formed by the collision of existing stars), the rate of cosmic rays reaching Earth is maximum. This explains the variation of rays, and hence warm and cool temperatures.

The results showed that the Solar System goes through a spiral arm (where the supernova are located) every 140 million years. This result was later shown to gel with observed climactic variations over the last 500 million years, when the Earth varied between icehouse and greenhouse periods.

"We had published a paper that showed a surprising correlation between cosmic rays and the Earth's cloud cover. The implication is that more cosmic rays give more clouds which leads to a colder climate. Less cosmic rays give less clouds and a warmer climate," Svensmark says.

The answer lies in isotopes of carbon carbon-12 and carbon-13. Bacteria and algae in the ocean grow by taking in carbon-12 atom whereas carbon-13, is used by sea creatures to make their carbonate shells. Variations in carbon-13 therefore, show how productive the biosphere was at that point of time.

"The carbon-13 signal is a remarkable data series spanning 3.8 billion years and the variations in this signal correlate with the reconstructed cosmic ray signal. So, the idea is that cosmic rays changed climate that set the conditions for life," says Svensmark.

The scientists are sure of their findings. "This is not a coincidence. The chances of it being a coincidence is about 110,000. We have statistical records to prove it. It offers a new perspective on the connection between the evolution of the Milky Way and the history of life over the last four billion years," remarks Svensmark.