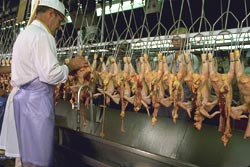 a recent study proffers yet another rationale for not consuming chicken. As per its findings, the foodstuff is not only laced with antibiotics, but is also full of carcinogenic arsenic. The arsenic contamination is higher than what was previously estimated -- as much as three to four times more than the levels of other poultry meat.

Arsenic occurs naturally in two forms: organic and inorganic. Inorganic arsenic is more toxic than the organic variety, and is classified as a carcinogen; studies have linked chronic exposures of 10-40 microgrammes per kilogramme of body weight per day with skin, respiratory and bladder cancers. On the other hand, organic arsenic helps combat diseases of poultry; it is, therefore, approved for use in roxarsone -- an additive fed to about 70 per cent of chickens raised for food in the us. But once ingested, some of the organic metal gets converted into the inorganic form, which is retained in animal tissue, especially the liver.

During the study, researchers from the us department of agriculture analysed data pertaining to the arsenic content of 20,000 meat samples collected by the us Food Safety and Inspection Service (fsis) between 1993 and 2000. They found that meat of young chicken -- which account for most of the chicken meat consumed in the us -- has arsenic concentration (0.39 parts per million) three to four times higher than meat of mature chicken or other types of poultry products.


Even a person's daily intake of the metal was deduced -- an individual consuming an average of 60 grammes of chicken per day ingests 3.52-5.24 microgrammes of inorganic arsenic daily. For a person weighing 70 kilogrammes, this breaks down to 0.05-0.07 microgrammes per kilogramme of body weight per day. The figure is well below the fao-who limit of two microgrammes per kilogramme per day of inorganic arsenic. But it is not much of a consolation -- many groups (especially children) may be exposed to doses up to 10 times higher.