Even cattle dare not ingest the water of the Naini lake 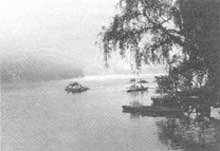 INCREASING population, unplanned growth of human settlements and tourists together appear to have taken a toll of the beautiful lake that gives the hill resort of Nainital its name.

According to a recent decade-long study conducted by D K Pandey of the Dehradun-based Forest Research Institute, the water quality of the Naini lake has been steadily deteriorating and is now unfit even for consumption by cattle (Indian Journal of Forestry, Vol 17, No 4).

"The results (of the study) show that the water of the Naini lake is highly polluted due to the addition of exogenous wastes as a result of a more than 37 per cent increase in human population in the catchment area of the lake and too many tourists, especially in autumn months, during the last decade," explains Pandey.

With an increasing amount of sewage, municipal and domestic wastes finding their way into the lake, the quantity of organic matter in its waters has risen sharply. This has starved the lake of cleansing oxygen, pushing up the biological oxygen demand (BOD) -- a measure of the quantity of oxygen required by aquatic microorganisms to degrade the organic matter in the lake -- by over 20 times over a 10-year period. From 15.5 parts per million (ppm) in 1981, the BOD shot up to 357.23 ppm in 1991.

Similarly, the concentration of free carbon dioxide in the lake --- which depends on the population of aquatic organisms and the type of waste added to the water ecosystem --- has increased by 670 per cent over the same period.

Although waterbodies have a mechanism for recycling wastes quickly, the mechanism fails if the contamination level increases beyond their regulatory capacities. "This is precisely what has happened with the Naini lake," says Pandey.