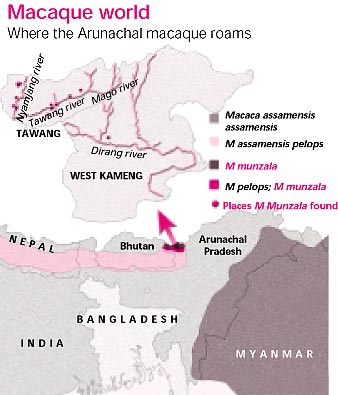 Science has reached the deep-forest monkey of West Kameng, Arunachal Pradesh. It is now officially recognised as Macaca munzala. The macaque was discovered by a team of ecologists comprising Anindya Sinha of the National Institute of Advanced Studies, Bangalore; Aparajita Datta and Charudutt Mishra of the Mysore-based Nature Conservation Foundation (ncf) and M D Madhusudan of the Wildlife Conservation Society, Bangalore ( wcs). It changes the perception that all possible large mammals in the Indian sub-continent were known once naturalist E P Gee discovered the golden langur about 50 ago.

Found in the mountainous districts of Tawang and West Kameng, the macaque has long been known to the local people as a species that occasionally raids their crops, but largely keeps to the deep forests, called mun zala. In incorporating this name into the monkey's l atin ascription, the ecologists acknowledge the contribution of local knowledge to the find.

The new macaque was observed and photographed during two expeditions the scientists undertook in 2003 and 2004. Fourteen multi-male, multi-female troops of this largely terrestrial primate were observed in different habitats over approximately 1,200 square kilometres (see map: Macaque world).

Besides the macaque, recent expeditions by ncf and wcs in Arunchal Pradesh have led to the discovery of three other large mammals previously unknown from India: the leaf deer Muntiacus putaoensis, the black barking deer Muntiacus crinifrons and the Chinese goral Nemorhaedus caudatus, a primitive mountain goat.
Macaques are a large, diverse group of Old World primates (with 19 species in Asia and one in Africa) second only to humans in geographical distribution and the diversity of habitats they occupy. It is extremely significant that the world of wildlife biology chanced upon the dark, heavy set primate a full 101 years after the last macaque, the Pagai macaque, was described by Miller in 1903. The species, believe the ecologists, is in all probability a close cousin of both the Assamese macaque and Tibetan macaque. However, it has several distinct features, including a characteristically dark face with distinctive facial markings. It is also among the highest dwelling primates in the world, occurring between elevations of 1,600- 3,500 metres above sea level.

Says Anindya Sinha, "We may have discovered this species but the community knew of it well. In fact their understanding, descriptions and nomenclature make us believe that they are also aware of the Tibetan macaque's presence in their region." This is significant, for the range of the Tibetan macaque is supposed to be more than a thousand kilometers north of this area. "The communities even recognise the hybrid monkeys (due to mating between populations of two distinct species) as a distinct group," Sinha adds. The people of Tawang and the high altitudes of West Kameng belong predominantly to the Buddhist Monpa tribe and, in general, do not eat primates. However, some hunting of primates for meat is reported in lower-altitude regions (see p 50-52).

The ecologists are now working with the government to create India's first community reserve in the region, providing protection to the species as well as keeping the tenurial arrangements the same. Having signed a memorandum of understanding with the state government, ncf has helped it declare the area as the Tsangyang Gyatso Biosphere Reserve, which will also help attract resources for conservation. The team will now carry out in-depth (including genetic) studies on the new species and train researchers from the region to carry out further work. Sinha explains why: "At the end of the day it's the people living there who will protect or conserve the diversity.