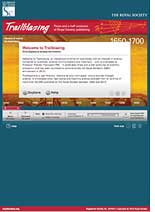 There is Benjamin Franklins account of his kite-flying experiment. So is Isaac Newtons article on white light and Stephen Hawkings early writing on black holes. Londons Royal Society has kicked off 350 years with http//trailblazing.royalsociety.org/, a new interactive corpus that includes 60 articles from its journal Philosophical Transactions. Leading scientists and historians scanned more than 60,000 articles published since the journal first started in 1665.

Trailblazing will also have the original manuscripts of the work of scientific giants such as Newton, Hooke, Faraday and Franklin.According to the Societys president, Martin Rees, The scientific papers on Trailblazing represent a ceaseless quest by scientists over the centuries, many of them Fellows of the Royal Society, to test and build on our knowledge of humankind and universe.