Four murders and a power plant 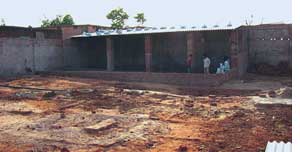 investigations into the murder of four security guards at a proposed power plant in Jharkhand are revealing uncomfortable truths about industrialization in the state. The company that wants to buy land in Chakla village of Latehar district called the guards martyrs and held Maoist rebels responsible for the murders.

Sources in the police intelligence said the reason for the killings could be entirely different the company may have been using a renegade Maoist faction to coerce the villagers to sell their land. The police suspect the renegades turned on the company after being left out of the gravy train.

After midnight of April 5, unidentified gunmen came to the site where the Abhijeet Group aims to build a power plant and killed the four guards. Faisal Ahmed, one of the first in the village to reach the spot, said the bodies were ridden with bullets.The victims' hands were tied behind them with their belts. The killers left pamphlets claiming they were from Sanyukt Krantikari Committee, a Maoist outfit.

The Abhijeet Group, which owns the company building the plant, was quoted in the media as saying the violence resulted from its refusal to meet the Maoists' extortion demand of Rs 20 lakh. The company was to later deny having said this.

The incident had the company scurrying to the governor's office for help. An emergency meeting was called at the Raj Bhawan where the governor's advisor T P Sinha asked the director general of police to speed up investigations and identify and arrest the killers. Officials present at the meeting expressed concern that such incidents may drive investors away from the state.


Investigations indicated land purchase deals for the 1,200 MW thermal plant led to the killings. A breakaway faction of a Maoist group, the Nageshwar gang, killed the guards, intelligence sources said. The police have arrested a member of the gang, Sanoj Lohra.

Lohra's interrogation and the statements given by the villagers have given the police vital leads. "We are probing this case from the angle of a land deal gone sour," said Shamim Ahmed Khan, the officer investigating the case.

Police intelligence sources revealed the guards were brokering land deals. In the initial days, the company apparently used the Nageshwar gang to strike land deals but later started using the guards they hired from among the villagers, to approach landowners. The Nageshwar gang members may have been angered at being sidelined and killed the guards, the sources said. The company's project manager Rajeev Goyal denied having links with Maoists or any gang.

Bhado Oraon, whose 30-year-old son Vishnu was one of the victims, partially confirmed what intelligence sources said. He said his son was brokering land deals and had said he was being threatened. "My son had complained to the company but they took no action," Oraon said. Other villagers including Iqbal Khan, brother of another victim, Intaaf, said the motive for the murders was land deals and revenge. They said it could not be Maoists, as they never target civilians.

Superintendent of police, Latehar, Hemant Toppo, who has since been transferred, said he was unaware of such intelligence inputs. He said there could be many disgruntled groups as Abhijeet Group was offering Rs five lakh an acre (0.4 ha) in Chakla against Rs 50,000 it offered in other villages. It is difficult to say who killed the guards, he said.

Abhijeet Group had initially tried to buy land in Chitrapur village where it has a lease for mining coal on 1400 acres. It was unsuccessful as the tribals there refused to sell land and beat up the company surveyors. Hempur was the second site choice. Here too there were strong protests from tribals so the company shifted base to Chakla, eight kilometres from Chitrapur.

Chakla has a mixed population and fewer tribal families. "Resistance was less as the scheduled caste and Muslim landowners were willing to sell land," said Dari Mahto of Jharkhand Mines Area Coordination Committee who is fighting displacement of people due to mining activities and steel plants.

Once the company decided on the site, it could have approached the government to acquire the land. But it chose the tougher route of buying directly from villagers. This option is fraught with problems as the refusal by even one landowner to sell land, can stall the project. The company was also supposed to take permission from the gram sabha. The district administration helped out by organizing a gram sabha meeting which was inconclusive as the village comprising 500 families was divided. The Munda tribals, like the tribals in Chitrapur and Hempur, were not willing to sell their land. The scheduled caste and Muslim landowners were ready though they did not say so openly. After that the situation started going out of control, said villagers. Middlemen arrived on the scene and started luring landowners with high price offer of Rs five lakh an acre.

The company purchased 300 acres from the villagers of whom five were appointed security men to guard the site. "I could not prevent other villagers from selling land. Now almost the whole village is sold," said Fuldev Munda, the gram pradhan. An advocate who helps the villagers with their land related cases, said all the land deals in the village are being struck through middlemen which is leading to chaos. Goyal, the company's project manager, denied dealing through middlemen. "We are dealing with the villagers directly and offered jobs to those from whom we purchased land," he said.


Abhijeet Group's rival in the region, Essar, has proposed a 1,800 MW thermal plant near Chakla. After its surveyors were beaten up in Puratoli village, Essar said it is going slow and is trying to win the confidence of villagers by offering them alternative land in addition to compensation of Rs five lakh an acre.

The competition for land between the two companies has made many villagers rich overnight. The richest zamindar in the village who sold 20 acres of his land, now drives around in a Scorpio car. Thatched mud houses are giving way to pucca houses but villagers said the prosperity would not last. "We are rich but have no jobs as our lands are sold," a villager said.

Oraon who lost his son said he is still waiting for full payment for his land and the Rs 2 lakh compensation he was promised on Vishnu's death. A few other villagers like Faisal Ahmed who brokered land deals for the company now fear for their lives after what happened to the four security guards.