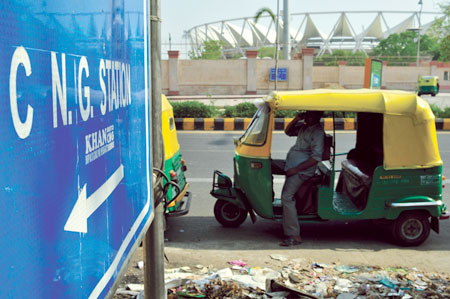 VEHICLES and fuels must be seen as a system and not in isolation. Even a clean fuel like CNG may emit high air pollutants if the vehicle engine technology is inefficient to burn the fuel. This is the message from the first detailed testing of CNG three-wheelers in Delhi by researchers from University of British Columbia, Canada.

Public transport is always the key target of pollution control. In Delhi under the 1998 Supreme Court order all autos were converted to CNG. The study published in February issue of Environmental Science and Technology compared the CNG autos powered by four-stroke and two-stroke engines and four-stroke petrol autos to assess the impact.

It considered emissions of air pollutants, including oxides of nitrogen, carbon monoxide (CO), fine particulate matter (PM2.5) and greenhouse gases—carbon dioxide (CO2) and methane—from vehicles bought between 1998 and 2001 and between 2007 and 2009.

Central Pollution Control Board uses emission estimates based on a study by the Automobile Research Association of India (ARAI) in 2007 for for CNG autos. The study was based on limited sampling. “Our study was done on a larger scale and on randomly recruited samples of autos in Delhi,” says Conor Reynolds, lead researcher of the present study. In the recent study the conversion of the autos showed mixed emission results depending on the type of engine. They found that CNG two-stroke autos emit around 30 times more PM2.5 than their four-stroke counterparts. “This is due to incomplete combustion of fuel and lubricating oil,” says H B Mathur, former professor of mechanical engineering at IIT Delhi.

CNG four-stroke showed the best results, though the difference in emissions with petrol four-stroke autos was narrower. The researchers note that 90 per cent of the CNG autos in Delhi are already four-stroke and this has helped lower particulate emissions by 99 tonnes a year. If the remaining 5,000 autos are also replaced with four-stroke then an additional reduction of 96 tonnes a year can be achieved, they add.

Experts say the variation observed in the emissions from the studies emphasises the need of a representative sample. “Sample size makes a lot of difference and ARAI results should be taken with a pinch of salt,” says Sarath Guttikunda, an air quality expert in Delhi.

While Delhi has banned registration of two-stroke engines, other cities like Pune and Bengaluru are embarking on clean fuel programmes—CNG and LPG—and can take note of these evidences to shape policies. Two-stroke conversion to gaseous fuels should be done with caution and quality control, the researchers say. Maximum benefits can be obtained from CNG four-stroke.

High methane emissions have always been a problem with CNG autos. So they are often criticised for contributing to climate change. The study found that CNG two-stroke engines with higher unburnt emissions contribute twice as much than four-stroke CNG to global warming. But the contribution of CNG four-stroke autos to global warming is not more than petrol ones if emissions of CO and total hydrocarbons (THC) are considered. Petrol autos may emit lesser CO2 and methane, which are the dominant greenhouse gases listed under the Kyoto Protocol, but as per the study petrol autos emit more CO and THC.