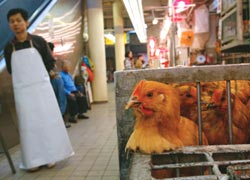 a man in Hong Kong died on February 16, 2003, and his son fell critically ill after being infected with avian influenza or 'bird flu'. Genetic tests show that the virus is the h5n1 strain that emerged in 1997, killing six out of 18 people it infected. But the new cases in a single family have raised fears that a more contagious and fatal form of the virus has surfaced now.

The father and the son contracted the virus after making a trip to the Fujian province of China in January 2003. The boy is now in a stable condition. His sister also died on February 4, 2003, after developing similar symptoms. But her illness was not attributed to bird flu. "The virus will be tested to verify if it is exactly the same as the 1997 strain," says Yeoh Eng-kiong, Hong Kong's secretary for health.

During the 1997 outbreak, the h5n1 strain had crossed the species barrier (from poultry to humans) for the first time. The epidemic had lead to the slaughter of Hong Kong's entire poultry stock of over a million birds. Most of the people had contracted the virus directly from the birds. Scientists say that Hong Kong's crowded farms and fowl markets act as breeding grounds for new strains. Genetic tests done in 2002, at the us-based St Jude's Children's Research Hospital showed that the 1997 outbreak followed a single genetic mutation in the h5n1 strain.