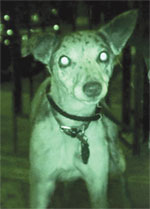 In early August, a grainy footage of four masked men drugging a fox and later beating it to death with cricket bats in a London park posted on YouTube and Facebook sparked media outrage.

A week later Guardian revealed that the footage was an elaborate hoax.

The filmmakers said no real foxes were harmed in the film, which was intended as a satirical swipe at “media hysteria in the UK over the danger of urban foxes”. The dead animal in the footage was played by a stuffed fox, the filmmakers told Guardian, while the live fox was played by a pet dog.

Atkins and Howard told the newspaper they were surprised when the video was so widely assumed to be authentic. Both said they were staunchly against fox hunting.

The pair provided Guardian with a footage of their filming expedition in the park. The footage showed them giggling as they chased what was clearly a pet dog across a park.