The Swiss, trust them! have come up with a digital bank note aesthetic, state of the art and in-copiable 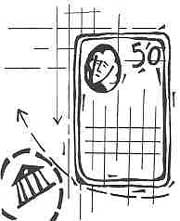 THE Swiss Central Bank, Zurich, will soon be giving the public a banknote so technologically advanced that it would be almost impossible to produce a counterfeit. This comes in the form of the world's first digitised banknote, entirely designed on a computer. The Bank chose Jorg Zintzmeyer, awell- known computer image programmer with an impressive portfolio, to design the hi-tech notes.

Studies have shown that most of the monetary transactions are made by people while standing and Zintzmeyer, accordingly, laid out a predominantly vertical design for the new notes, unlike American notes which are horizontal. The design can be resolved into 2.5 billion points, each of which can be accessed electronically. The note is characterised by a little raised triangle at the corner which assists the blind, and a number of official seals 3nd anti-fraud figures that dance around like in a hologram.

Zintzmeyersays that a bank-note is a medium by which 'the identity of a nation comes to the fore',and, the new notes will feature figures of artists, musicians, architects and writers to emphasise their international influence and to highlight their Swiss origin. The 50-franc bill carries the profile of Sophie Taeuber-Arp, a Swiss pioneer of abstract art. The architect Charles Edouard- Jeanneret dons the IO-franc bill and AlbertoGiacometti, the sculptor, the IOO-franc one.

Zintzmeyer overcame 16 other designers in the reckoning. Zintzmeyer and his team of collaborators from his design farm, Zintzmeyer and Lux and Orell Frissili Graphic Arts Ltd. of Zurich designed the new note. The note is as aesthetically appealing as it is techno- logically smart. It has a variable colour ink line that changes from green to black when tilted and so fine is the engraving that it yields a blur when photocopied. The bill is divided into seven vertical sections designated from top to bottom on the left hand side by the alphabets ~ through H. Down the left side and beneath a greenish portrait of Tuueber- Arp, the number 50 is scattered. With a slight tllt of the note, the number, as ifby magic, gathers and appears at the top left hand corner. The number in the centre of the note flips back and forth along-with the quintessential Swiss Cross and the Central Bank logo as the bill is rotated along a vertical .~ axis. Further down, a chameleon numeral printed with optically variable ink changes colour from deep green to violet.

Apart from the numbers and a smattering of Romansch, a Swiss dialect of areas near Davos, Taueber Arp's birtplace, it carries a thumbnail biography of the artist enclosed in a tiny orange box. These are just a few of some twenty-five anti.fake measures that the bill carries. The exact number of such measures, however, is a trade secret of the Central Bank.

"Most of the features have been offered in one form or the other, but never before has there been such a comprehensive collection," says Klaus Osch, chief executive of Orell Frissili. His company spent to the tune of $66 million to design and prepare the new notes.

The printing process is also pretty complicated with silk screening for the chameleon numerals and hot stamping for the silvery elements. The bills, after an assembly of ten different printing paraphernalia, are coated with a fine film of protective lacquer to prevent defacing and to prolong their lives.

The Bureau of Engraving and Printing, Washington, admitted that this was a breakthrough as far as banknotes are concerned. Larry Felix, the director of communications at the Bureau, however, hastens to add that the Treasury Department does not "have the luxury of pulling out of circulation a banknote whenever a device falls off". The new note will cost an equivalent of 25 cents each for printing and engraving as compared to the 3.7 cents apiece for the current $100 bills.

The new notes might be here to stay, but people with slight aesthetic senses might have, difficulties with engaging them in free transaction. After all, the new note is a perfect example of the new generation techno-art.