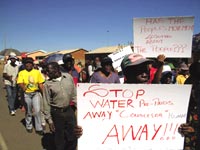 It is difficult to make people pay for something they perceive to be their natural lawful right. That is the problem facing the company that supplies water to the South African city of Johannesburg and the giant townships nearby. With new investment from foreign companies, supplier firm Johannesburg Water is now seeking commercial returns.

But most people are resenting the arrival of water meters. Protests against the meters are becoming more vociferous. They have been organised by the Anti-Privatisation Forum, which may field candidates against the African National Congress in future elections. The forum says that since unemployment is very high in the townships, few people have the ability to pay for water.

Johannesburg Water's Anthony Still insists that though water may be a human right, free water in unlimited quantities is not. According to Still, the new meters allow people to use 6,000 litres of water per month free of charge. This is as per the internationally agreed minimum quantity. Even after that, householders can recharge the meter with an electronic key, which would bring their charges down below the flat rate charged previously if they use an average amount of water.