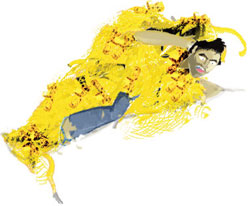 NUMBER of people who can benefit from government’s welfare programmes is going to swell. Currently, the Central government caps the entitlements under most welfare programmes to those below the poverty line, which is as low as Rs 12/day/person for rural areas and Rs 18/day/person for urban areas. State governments have been opposing this mechanism. In future, the ongoing socio-economic and caste census will decide the beneficiaries.

It took almost 18 years and a public outcry to correct the method of identifying beneficiaries. In 1993, when India embarked on economic liberalisation the Planning Commission assigned this function to the poverty line, even though the line was never drawn for this purpose. It helped cut down social spending by bringing down the number of government programme beneficiaries.

On September 20, the planning commission filed an affidavit in the Supreme Court suggesting Rs 26 per day per person as the rural poverty line adequate to cover food, education and health expenditures. This triggered an outrage, with activists and political parties saying it is too low. Political and policy parleys at the highest level followed. On October 3, at a joint press conference Jairam Ramesh, Union rural development minister, and Montek Singh Ahluwalia, deputy chairperson of the Planning Commission, said the poverty line would not be the basis for selecting beneficiaries for development programmes. Instead, the socio-economic and caste census results will be used to target development programmes.

“We are now clearly, categorically and unequivocally saying there is no link between state-wise poverty estimates done by the Planning Commission and the selection of welfare beneficiaries,” said Ramesh. “Poverty line will remain a relevant reference point to see how development is helping to take more and more individuals above a fixed line over time and across states,” Ahluwalia added.

It marks the end of the use of the poverty line for access to entitlements. In 1993, government made the public distribution system accessible to only those below the poverty line (BPL). This was the first case of using the line for determining who gets welfare benefits. After this, many development programmes were limited to the BPL category. “It created a new category among the poor, excluding many deserving people,” says Biraj Patnaik, an adviser to the food commissioners to the Supreme Court.

“This is not an appropriate use of the poverty line. No expert recommended using the poverty line in this manner,” says Himanshu, an economist in Delhi. State governments also complain that the poverty line is not the right tool for estimating the number of poor. Bihar, for example, says about 80 per cent of its population is poor but the Planning Commission decides development funds based on the poverty line estimate, which is substantially lower. “Only dogs and animals can live on this poverty line,” says N C Saxena, member of the National Advisory Council. “Using the poverty line for entitlement keeps away a large number of deserving people.”

Usually, the rural development ministry conducts a BPL census before a five-year plan. This becomes the base for deciding the volume of development programmes. In 1992 the ministry, based on such a survey for the eighth plan (1992-97), suggested a poverty line of Rs 11,000 per year, almost three times of the current poverty line figure. The commission rejected it, saying it was too high a figure.

For 32 years the way the poverty line is measured has remained unchanged, though of late there has been talk of changing its parameters. When it was set in 1979, the poverty line was defined using nutritional status, not the current calories consumption. This definition was applied only once.

Revision of the poverty line to factor in price rise too needs correction. At present, the government uses the price indexes for rural and urban workers. These indexes are usually used for measuring dearness allowance of government employees and are not suitable for guessing long-term change in price. The result of this clinical assessment is that Rs 12/day/person rural poverty line set at 2005 prices became Rs 25/day/person at June 2011 prices. Double but still misleading.