A municipal park in Nagercoil is up for grabs 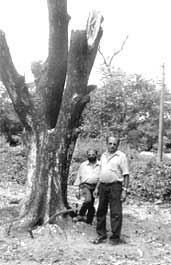 the C P Ramaswamy Iyer Memorial Park in Nagercoil, the district headquarters of Kanyakumari, Tamil Nadu, is under threat from more quarters than can be imagined. The park is 1.8-hectares park is right in the heart of the city and was inaugurated on December 19, 1943, to commemorate the 60th birth anniversary of Iyer, former diwan of Tavancore State. Its management is in the hands of the municipality of Nagercoil under Tamil Nadu's Parks, Playfields and Open Space Preservation Act of 1959, which prohibits the utilisation of the earmarked area for any non-park activities.

These days, the park is not known for the greenery and old trees, or for being the lung of Nagercoil city. Rather, it is the centre of a controversy.Various agencies and individuals, supported by the municipal authorities, are eyeing the valuable land of the park for all sorts of activities from public works to commercial works. The first blow on the park came when 186 sq metres of area was allotted by the municipality for the construction of a public toilet right in front of the park. The foul smell emanating from the latrines has made breathing in the park quite a pain. But the municipality is happy getting Rs 2 lakh from the lease given out for the land.

Another 185 square metres has been taken by a mid-day meal centre. While public money is spent on constructing the structure, the building is hardly utilised. More than 338 sq metres has been leased out to Bharat Petroleum Ltd for a petrol bunk. A hall has been built inside the park in the memory of the late Jeevanandham, a leader of the Communist Party of India. In 1999, a road - five metres broad and 100 metres long - was paved inside the park area at a cost of Rs 6 lakh. Needless to mention that this is a non-park activity.

But the worst blow to the park was dealt by the Nagercoil municipality when it permitted the Tamil Nadu Drinking Water Board to acquire 1,500 sq metres to build an overhead water tank, a commercial complex and a guest house. The permission came about as a result of the municipality, controlled by the Dravida Munetra Kazhagam ( dmk ), to the state government also ruled by dmk . Trouble began one year ago, on July 30, 1999, when the municipality approved a tender for cutting trees of the park and disposing them. The calling of the tender, its submission and approval happened on the same day. The trees in this area of the park, many as old as 100 years, came under the axe. What followed was a tussle between the municipality and the Conservation of Nature Trust, a local organisation. Police was called into the matter and some arrests were also made. The matter went to the Madras High Court, which has granted a stay on the matter, temporarily saving the park from commercialisation. But several valuable trees had already been cut by then.