French demands -- backed by violent agitations -- for a ban on the entry of cheap fish into France has fallen on deaf European Community ears. 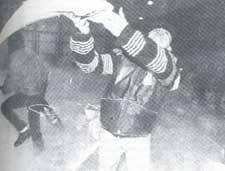 WHILE the European Community has rejected vehement French demands for a ban on the import of cheap fish primarily from Russia and other non-EC countries, it has agreed to monitor fish exports from these countries more closely.

France -- one of the biggest fish consumers in the EC -- had sought wider application of a 30 per cent increase in minimum import prices approved by the EC on white fish in the last week of February and applicable until the end of June.

Responding to widespread protests and large-scale violence by French fisherfolk, the EC set the higher minimum price and described the hike as the best response to the problem of cheap imports. EC officials noted, however, that Russian fish is being routed via Iceland to avail of the low 3.5 per cent tariff charged to Iceland by EC under a bilateral treaty. The EC tariff otherwise on fish from Russia, would be 12 per cent.

Fish consumption in France has been declining, beset by a recession-caused decrease in poultry and pork prices, which have fallen by as much as 25 per cent. Furthermore, major fish-exporting countries such as UK and Spain have devalued their currency and can sell more cheaply in French markets.
Irate French fisherfolk have fought street battles with the police all along the French coast. In Quimper, for example, a peaceful march turned violent as protestors set off small explosives, broke windows and carried a coffin symbolising the death of the fishing industry. In neighbouring Nantes, police fired tear-gas after being assaulted by a mob, which stormed police barricades. In Boulogne-sur-Mer, fisherfolk damaged goods worth about US $854,000, when they raided a warehouse and trailers and set fire to fish stocks from Denmark and Ireland.

Two days before the EC meeting in Brussels that set minimum import prices, protestors battled police for three hours after partly destroying the fish market at Rungis and causing damage estimated at US $4.5 million.