Suppliers let off the hook in the final draft 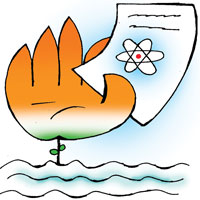 THE Union Cabinet cleared the nuclear liability bill on August 20 with 18 amendments. The amended version of the bill sparked a controversy. An amendment in it protected foreign suppliers of nuclear material in the event of a nuclear accident.

The amendment in clause 17(b) said the operator of a nuclear facility can sue suppliers of any defective equipment only if the supply was made "with the intent to cause nuclear damage". This effectively made only the operator liable for damages. The change angered the opposition Bharatiya Janata Party (BJP) and Left parties. By the time Down To Earth went to press, the Congress-led UPA government had agreed to drop the word "intent" from the clause before tabling it in Parliament on August 25.

Clause 17(b) of the original draft provided operators the right to seek damages from suppliers in the event of an accident resulting from wilful act or gross negligence. The parliamentary standing committee that examined the bill said the clause provided an easy escape route to foreign suppliers as their wilful act or gross negligence would be difficult to establish in a compensation case. The panel modified the clause. It made the supplier liable if the nuclear incident resulted from supply of substandard material, defective equipment or services and gross negligence. This change helped bring the BJP on board.

When the standing committee tabled its report in the Rajya Sabha on August 18, the opposition erupted over some last-minute amendments. The changed clauses said the operator could seek damages from the supplier only if it had a written contract with the supplier as specified in 17(a) "and" if it could prove gross negligence as in 17 (b). The change was ammunition for the Left parties that have always opposed the bill. Even BJP raised a hue and cry. "This makes 17 (b) contingent to 17 (a) and paves the way for foreign suppliers," said CPI(M) general secretary Prakash Karat at a press briefing. The Union Cabinet dropped the offending "and", and cleared the bill. But the next day, on August 21, it was found that clause 17 (b) was further tweaked by introducing the clause "intent to damage".

CPI MP and national secretary D Raja said the latest amendment to Clause 17(b) is "ridiculous and irrational" since it assumes the supplier will accept the accident is a result of intent to cause damage.

The introduction of another clause, 7(1), too, has not gone down well with the Left. The clause allows the government to assume full responsibility for nuclear installations operated by private players. This contradicts the standing committee report which recommended that private operators be kept out. "The amendments to the bill seek to dilute the original bill to protect the interests of suppliers and private players," Left leaders said in a joint press statement.

The bill has a few amendments favouring victims. It says the operator can seek recourse to suppliers only after compensating victims. The bill increases operator's liability cap to `1,500 crore from `500 crore. The overall liability cap remains at 300 million SDRs (quasicurrency) or `2,100 crore as proposed in the original bill. Science and Technology minister Prithviraj Chavan said a cess would be imposed on nuclear power to fund the gap between the overall cap and the International Atomic Energy Agency treaty on nuclear compensation to victims.