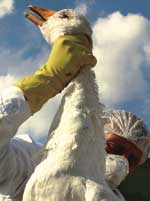 pakistan has ordered culling of over 16,000 chickens at a poultry farm in Tarlai region near Islamabad where a chick died of suspected avian influenza.

The ministry of food, agriculture and livestock said it took the decision on culling "to prevent the fourth outbreak of the avian flu virus in the country. Though laboratory confirmation is still awaited, the poultry death had strong clinical evidence and symptoms of h5n1 infection, the ministry said. The first avian flu case in Pakistan was confirmed in March, following which around 25,000 birds were culled.

Meanwhile, the British government has ordered the slaughter of some 35,000 chickens at a farm in the south-eastern county of Norfolk, after dead birds tested positive for the virus.

Early tests showed that the virus strain is likely to be h 7, which is less risky to humans than the h5n1 variant. Britain's ministry for environment, food and rural affairs says its step to cull the birds was a precautionary measure.

So far, a swan that died in Cellardyke, Scotland, on April 5, is the only bird confirmed with h5n1 virus in the uk.

Meanwhile, Compassion in World Farming (cwf) -- a European animal welfare organisation -- has expressed anguish at birds being stuffed into sacks, or burned and buried, alive. In a global appeal, cwf has cited the occurrence of the foot and mouth disease in the uk in 2001, when animals were slaughtered in violation of the country's animal welfare legislation.

Also, during the 2003 avian influenza outbreak in the Netherlands, the Dutch government ordered slaughter of around 30 million birds, though they were infected by the lesser virulent h7n7 strain and culling could have been avoided. cwf has requested that in case culling is necessary for disease control, it should be carried out swiftly, efficiently and humanely in accordance with the animal welfare legislations. "Methods used to kill birds must not cause animal suffering -- animals must be rendered unconscious immediately and remain unconscious until death," it says.