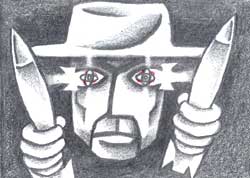 THE world seems to be edging back to the nuclear precipice that it had thought it had backed out gingerly from at the end of the Cold War. Between May and August this year, the German police seized 4 consignments of weapons-grade nuclear material from various parts of the country.

This is both confirmation of a burgeoning nuclear blackmarket as well as the arrests being just the tip of the iceberg: the number of suspected cases of nuclear crime in Germany rose from 41 to 241 between 1991 and 1993. In the latest incident, on August 12, a German was arrested in Bremen while attempting to sell a .05 mg sample of plutonium 239 to a journalist posing as a prospective buyer.

The chilling prospect of such small yet deadly transactions opening the floodgates for future nuclear material trafficking on a bigger scale has put most industrialised nations, especially European ones, int a tizzy. "Security measures in the countries where these materials are produced must be strengthened," said German interior minister Manfred Kanther at a nato foreign and defence ministers meeting in late August.
The suspected origin of most of the stolen nuclear materials is Russia's leaking nuclear establishment. In the Bremen case, the plutonium was accompanied by a certificate from Moscow's All Soviet Isotope Association. Besides, on August 10, about 300 grams of weapons-grade plutonium were discovered in a lead-lined suitcase on a Lufthansa flight from Moscow. German officials believe that the smugglers had the connections with Russian sources to get their hands on what was offered as a $250 million, 4 kg deal -- about half the quantity required by an amateur to build a bomb. And there were indications that the 600 grams of enriched uranium pellets recovered in June either came from a Russian power station or a defunct nuclear submarine.

Russia's ministry of atomic energy fiercely denies missing any weapons-grade nuclear material. Experts, nevertheless, point out that the collapse of communism has reduced the nuclear edifice to a shambles and salaries of 100,000 workers in nuclear plants and laboratories have shrunk to about $100 a month. The lure of extra income is, therefore, strong. Besides, under the disarmament treaties with the us, Russia is dismantling about 2,000 nuclear warheads a year and returning the plutonium to stores. Without proper safeguards, these could well be stolen. As if in confirmation, Russian police admitted that they had foiled 11 attempts to steal uranium from nuclear installations last year.

The smuggling incidents have had their fallout on the Indian subcontinent as well. A statement by a spokesperson of Berlin's justice department that evidence had been found of a planned, or even successful, shipment of weapons-grade plutonium from Russia to Pakistan, set off a furore in the Indian Parliament. On August 19, members in both the Houses demanded that the government raise the issue in international fora as it posed a grave threat to the country's security. However, Berlin authorities have refused to divulge any further details about the incident. Pakistan, predictably, denies that "any government agency" was involved in the smuggling.

Although there is a consensus that Russia's tottering nuclear establishment has served as a trigger to nuclear smuggling, many experts say it throws up basic questions about the provisions of the Nuclear Proliferation Treaty (npt). Says K Subrahmanyam, former director of the New Delhi-based Institute of Defence Studies and Analyses, "Under npt, the nuclear weapon states are exempt from international safeguards over their nuclear installations. The US does not want such controls and Russia will not subject itself to safeguards unless the US does so. Therefore the responsibility for nuclear proliferation rests squarely with the US"

The environmental ngo Greenpeace, however, says that the West's indignation over the outflow of nuclear material from Russia smacks of hypocrisy. It points out that France and Britain separate tonnes of plutonium every year from irradiated nuclear fuel received from countries across the globe, at their La Hague and Sellafield reprocessing plants. According to the organisation, "In all, these 2 countries may separate more than 20,000 kg or over 571 weapons worth of commercial, weapons-usable plutonium a year." The list of foreign clients of the plants include Japan, Germany, Belgium, Italy and Netherlands, it says.

Dhirendra Sharma, convenor of the New Delhi-based Committee for a Sane Nuclear Policy believes that the whole issue may have been blown up. "The clandestine nuclear trade has been going on with the knowledge of all the major nuclear powers. All these years nobody raised a finger. But now that Russia has entered the market and can supply the material at a lower cost they feel threatened," says Sharma.