Vedanta's application to mine in Orissa hills renews agitation

Recently, a notice was found pasted at the tehsil office at Paikmal, Bargarh district, Orissa. It mentioned Vedanta Alumina Limited had applied to mine bauxite from 1179.48 acres in the Gandhamardan hills; anybody wishing to object had to do so within 15 days of the notice's date. Word spread fast and a movement that successfully stopped balco from mining here two decades ago has resurfaced (see box Fatal attraction).

"This notice, no 4032, dated 25.04.2008, was seen pasted at the office on June 5. So, officially, the date to raise objections was already over. This is foul play," says Dhiren Mohanty, convenor of the Gandhamardan Surakshya Yuva Parishad (gsyp), which had spearheaded protest in the past.

"As soon as we saw this notice, we agitated before the tehsildar. We forced him to accept our objection." the tehsildar of Paikmal, Debraj Dandsena, refused to comment, but said gsyp's complaint was forwarded to the chief minister, district collector and other concerned officials.

A 1963 study of the range, by G Panigrahi of the Botanical Survey of India, recorded 2,700 angiosperms and, out of 220 species of medicinal, quasi-medicinal and economically-vital plants, 125 species of important medicinal plants. Local people say such species number 500.

Moreover, according to Soubhagya Pradhan, there are 840 perennial springs here, which feed into 54 small streams and 14 larger streams joining 2 rivers, the Ong and the Suktel, in turn feeding the Mahanadi. According to local people, who surveyed the hills closely during the 1980s movement, there are 154 perennial streams feeding 22 water falls, the prominent ones being Narsinghnath Jharan and Harishankar Jharan (also the most sacred ones).

"The fight against balco was a fight for survival," recalls 60-year-old Basmati Mallick, who led the struggle from Motipali. Worried about the fate of the hills, which sustains some 1.3 million people, she says "We are like the old trees in the forest. Nobody can take it away from us."

Satyabhusan Sahu, Padampur mla and Opposition chief whip in the Orissa Assembly, has shot off a letter to the cm warning him of a fight. He has specified Ganchamardan is also a revered religious site, housing the 14 th century shrines of Nrusinghanath and Harishankar.More than 2.5 lakh pilgrims visit these shrines each year. Mohanty, too, is clear "Vedanta will be taught a lesson if it enters this place." 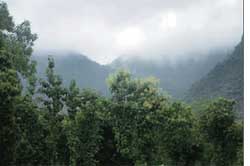 Says Vedanta official P K Panda, "This is unnecessarily being made an issue. We applied for lease, only as regular practice. No decisions have yet been taken." Vedanta has become a sensational name in the state, he regrets. "There must be around 20 applications for lease of Gandhamardan. Only our name is being dragged into controversy", he adds. The Paikmal telsildar, however, informs they have received instruction only on Vedanta, and gysp has already started organizing people.