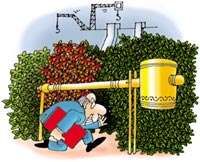 Strong political pressure is being brought to bear on Maharashtra to agree that the height of the Narmada dam should be increased. The state had objected to the move because it had not completed the rehabilitation exercise. The Narmada Control Authority, therefore, deferred the decision until a spot assessment was made.

Maharashtra pointed out that though it had relocated the displaced families, it hadn't provided them with proper infrastructure. However, the three other riparian states -- Madhya Pradesh (mp), Gujarat and Rajasthan -- are insisting that the height of the dam be raised from 100 metres to 110.64 metres without further delay. While the mp government claims to have resettled all the oustees, the Narmada Bachao Andolan alleges that over 10,000 families will suffer if the structure's height is increased.

As per a Supreme Court directive, the states must rehabilitate the affected people six months before carrying out construction. But so far they have flouted this order. Gujarat stands to gain the most from the project, as it will get water for drinking and irrigation and more power. In terms of displacement, the worst hit is mp.