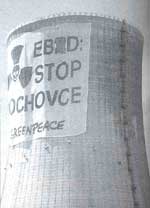 THE proposed Mochovce nuclear power project in Slovakia has created much heat in Europe. A chain reaction of protests has been set off and the whole project has got entangled in a complicated maze of arguments and counter-arguments. Neighbouring Austria and environmental groups like the Greenpeace had already let off much steam over the last few months. But last month decision-makers in Europe added their voice to the supercharged Mochovce debate: in mid-February, the European Parliament passed a resolution calling on West European leaders to freeze the funding for the power station until safety questions are answered to their satisfaction.

In the line of fire is the European Bank for Reconstruction and Development (ebrd). The bank -- formed in 1991 to advance project loans to former communist economies -- is slated to lend us $273 million to help complete 2 Soviet-designed nuclear reactors in Mochovce, which lies near Slovakia's border with Austria and Hungary. Electricite de France, a French utility, and Germany's Bayernwerk, are poised to pump in another us $594 million.

The ebrd rests its case to a large extent on the commitment of the Slovakian government to shut down 2 of the 4 dangerously antiquated nuclear reactors in Bohunice if the Bank funds the additional safety measures for Mochovce.

Without the foreign funding, the Slovakian government would still be able to complete the two 400-mw Mochovce reactors, but not be able to incorporate the additional safety measures. In its 1,000-page review, the Bank also maintains that the power plant is at least 5 per cent cheaper than natural gas turbines -- an alternative proposed by Austria.

However, experts are disinclined to accept such arguments at their face-value. They point out that there is no guarantee that Slovakia will not keep Bohunice beyond the deadline for decommissioning. Scepticism has also been aired about a plant that mixes eastern and western features.

Of late, the project's economics has been called into question as well. A report by the Oko Institut, a German ecological organisation, questions the basic premise of the ebrd that Mochovce is the lowest-cost option for Slovakia.

The Oko Institut's report, commissioned by Greenpeace, details several inaccurate forecasts in the Bank's pro-Mochovce study: inflated gas prices, a different exchange rate for construction costs and fuel prices, and over-optimistic discounting rates for decommissioning. According to Greenpeace's estimates, the nuclear plant is likely to cost us $217 million more than the gas alternative over its entire life span.

By far the most vociferous critic of the plant is Austria, which has threatened to pull out of the ebrd if the bank goes ahead with its funding plans. The Austrian government has been pushed into action by hostile public opinion, with the media raising visions of a "death reactor" across the border.

Environmental issues have always been at the vanguard of the country's politics and is deeply entrenched in the Austrian psyche. In a 1978 referendum, the country had narrowly voted against nuclear power, even though the first plant was by then complete and ready to function.

With such fierce opposition, the ebrd will have to go for a tense tightrope walking until it arrives upon a final decision on the Mochovce power plant in April.