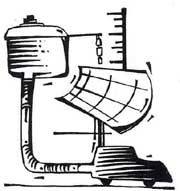 A PERSONAL mini radar system, which promises huge mass-marketpotential, has at last been developed. The new radar is named micropower impulse radar (MIR) and it will ultimately be used in almost everything from hand tools to burglar alarms. MIR is cheap, tiny and incredibly accurate at short ranges. It can measure water level in toilet tanks and oil level in car engines. It will warn drivers of blind spots ( specially while reversing).

MIR has been developed by Thomas E McEwan, a Jesearcher at Lawrence Livermore National Laboratory in California, us. Quite by chance, McEwan stumbled upon a concept of a personal home radar while working on how to measure the output of miniature nuclear-fusion reactions created in his laboratory by the nova laser, the world's most powerful laser. The technique McEwan devised to monitor the reac- tions could be used to make a micro home radar receiver, he reasoned. MIR will really become a mass market item when some company puts McEwan's design on a chip that sells for a dollar or so in the US.

MIR, like conventional radar, works by sending out a signal and listening for its echo. But instead of pa~ng attention to every echo, it watches only for those coming from a certain distance away - say about three metres. The distance is adjustable. That was the key to making the system simpler and cheaper . Conventional radars must sift through and make sense of echoes and stray signals coming from all distances. McEwan has also come up with an ingenious way to detect MIR'S pulses inexpensively. The system takes a series of 'snapshots' of returning signals, each at the precise time an echo is expected back. The snap- shots -actually measure- ments of voltage levels - are stored in a capacitor and then analysed using cheaper and slower electronics during the lull between snapshots. It may be hard to believe there's much of a lull, with two million snapshots per second, but the pulses are so brief that it's proportioned to one-second-long pulses separated by gaps of 15 minutes or so. MIR sends out about two million pulses a second, each last for at most a few billionths of a second. It works at ranges of 45 m or less and can run for years on a single battery. It's not only cheap and small but uncannily accurate, capable of measuring distances as small as fractions of an inch.