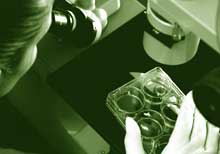 us presidentGeorge W Bush has been further isolated over the issue of embryonic stem cell research, which he opposes see Down To Earth, 'Stem cell bill unethical, says Bush', June 30, 2005, p 9). Senate republican leader Bill Frist has stood up against him on the matter. On July 29, 2005, Frist said he supported the stem cell bill, passed by the House of Representatives and awaiting a Senate decision, and that federal funds should be made available for such research.

A heart specialist by training, Frist justified his stand by using an example from heart transplantation, in which it is essential to define "death" to be able to use/harvest hearts from injured and sick people. Even in 2001, before Bush ceased government funding for such research, Frist had suggested that research on discarded embryos should be allowed as long as it is carried out ethically. For ethical research, he says, some changes are needed in the present bill, which lacks strong ethical mechanisms and those to prevent scientific oversight and could lead to exchange of financial incentives between fertility clinics and patients.

Though the Senate is currently divided on the issue, Frist's stance could break the logjam. The Senate is likely to vote on the bill in September 2005; Bush can still veto it, irrespective of the stand the Senate takes. Human embryonic stem cell research can lead to cures for juvenile diabetes, Alzheimer's disease and many such serious illnesses.