Pesticides are killing frogs and other amphibian species in the US 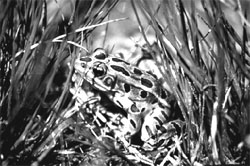 the frogs aren't leaping in the us anymore; they have been overfed on a cocktail of pesticides. Scientists at the us Geological Survey and us Department of Agriculture say the use of organophosphorus pesticides has led to a fall in amphibian populations breeding in mountain ponds and streams in California, usa . The pesticides, they suggest, are being carried on prevailing summer winds to Sierra Nevada, usa, the region where these amphibian species breed. Studies show that pesticides may also be one of the factors causing physical deformities noticed in many frog specimens.

The scientists have found proof that pesticides are absorbed by frogs in both aquatic and terrestrial systems and suppress an enzyme called cholinesterase, which is essential for the proper functioning of the nervous system. Modern-day pesticides bind with this enzyme in animals and disrupt the nervous system, usually causing death by respiratory failure.

Scientists collected 170 tadpole and 117 adult Pacific tree frogs, a species that is still fairly abundant in the Sierra Nevada, from a total of 23 sites in six locations. They found that cholinesterase activity levels in tadpoles were significantly lower in the mountains east of the San Joaquin Valley, where agricultural activity is less intense as compared to other sites. Moreover, cholinesterase activity became decreasingly lower in tadpoles picked from sites at higher elevations. Similar but less significant trends were seen in adult frogs. The researchers also measured concentrations of particular pesticides in the bodies of tadpoles and adults. More than 50 per cent of the adult frogs and tadpoles at the Yosemite National Park had measurable levels of chlorpyrifos and diazinon. Both degrade very rapidly in organisms and the detection of either compound indicates recent exposure to the chemicals. Chlorpyrifos and diazinon suppress nervous system activity and along with endosulfan, a frequently used organochlorine pesticide, are considered highly toxic to frog species. Diazinon has recently been targeted for a three-year phase out by the us Environmental Protection Agency.