From Britain to Nigeria 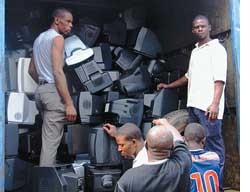 An old, broken-down television was shipped from London to Nigeria. Hot on its trail were journalists from the newspaper, The Independent and from Sky News. The TV had been fitted with a tracking device (a global positioning system, gps) and deposited by the team in Basingstoke's county recycling centre. Under UK's environment protection laws and the international Basel Convention on hazardous waste, the TV should not have left the country. But the recycling company contracted by the county council to deal with the waste, shipped the TV along with other electronic waste to Nigeria as second-hand good.

Using the gps , the journalists and Greenpeace tracked the TV to Alaba market in Nigeria. Alaba, a second-hand electronic market, receives about 15 containers of e-waste daily. These electronics are sold by the importer to smaller vendors who sell, fix, or dispose of them in the city.The team found their TV with its tracking system in a side street where it was stacked along with the many other TVs. They bought back the gadget pretending they were getting it for their Nigerian contact.

A Greenpeace spokesperson put the operation in perspective, "Three-quarters of computers sent from the industrialized world to Nigeria for reuse are beyond repair and end up being dumped."