The link between acid rain and avian waste 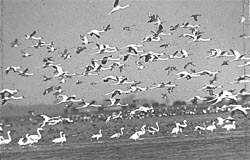 A study by Sarah Wanless of the British government's Centre for Ecology and Hydrology at Banchory in Scotland has shown that ammonia concentrations in the air near seabird colonies are 20 times as high as those typically found around chicken factory farms.

Factory farms were previously thought to be the main source of ammonia in the atmosphere, which contributes to acid rain and the 'nitrogen overload' of many ecosystems. While early findings suggest gannets are the worst offenders, it is the burning of fossil fuels that is considered largely responsible for creation of sulphur dioxide and oxides of nitrogen which are the main constituents of acid rain.

Automobile exhaust fumes are partly to blame but the worst culprits are coal-burning thermal power plants and the steel industry.

Europeans were among the first to worry about the phenomenon. In 1881, Norwegian scientists observed polluted snow and mass fish deaths were reported in the rivers of southern Norway. Lakes, too, began losing their fish populations. But it was only in the 1950s that the link with acid rain was found.

Despite power stations cutting their sulphur dioxide emissions by up to 90 per cent under a Europe-wide agreement, lakes and streams on the continent's highland may not become acid-free in the near future. A report by the Institute of Hydrology in Oxfordshire, uk, on how chemicals flush through Welsh river catchments, especially after flooding, suggests that even such drastic cuts will not have an immediate effect. The report says that underground reservoirs of acid built up over the years may keep on pumping acid into streams for decades to come.