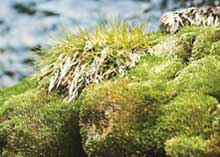 australian scientists have discovered a gene that could prevent frost damage to crops, thus saving billions of dollars a year worldwide.

The anti-freeze" gene has been identified in the Antarctic hair grass (Deschampsia antarctica) by a team headed by German Spangenberg of La Trobe University in Victoria. It allows the grass to tolerate temperatures as low as minus 30 c.

Spangenberg says the gene expresses a protein that helps the plant survive being frozen rock solid and then thawing. This helps prevents damage from ice crystals. Transgenic plants (containing the anti-freeze gene) were also found to tolerate extremely low temperatures.