Pomelo not only makes tasty salads, but also has antioxidants that fight cancer 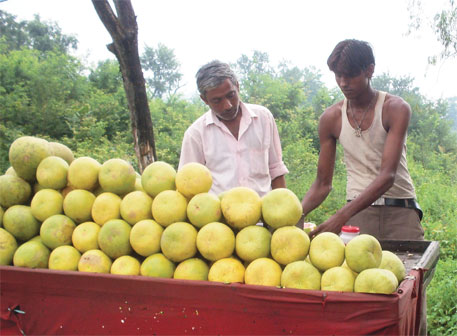 We have a big pomelo tree in our garden in Delhi and fruit chaats, Thai salads and marmalades were the only recipes I could think of using pomelo as an ingredient.

That was until a friend from Shillong visited and suggested that we make jambura makha, a type of salad, with the fleshy pink arils of the fruit. He also described how pomelo leaves could be added to daal and curries to enhance taste. A new world of flavours and aromas opened up for me as I started using leaves from the pomelo tree to flavour even my cakes and lemonades. Another way of relishing pomelo is sprinkling it with salt and pepper or adding sugar and enjoying it as a snack.

The giant citrus fruit is called Citrus maxima or Citrus grandis and is a native of Southeast Asia. Pomelo has two variants pale-fleshed and pink-fleshed. In India, the pink-fleshed variety is more common. This is called grapefruit and has more vitamins.

Given the diversity of languages in India, it is not surprising that pomelo has so many names—batabi lebu or jambura in Bengali, robab tenga in Assamese, babloos naranga and kambili naranga in Malayalam, bablimaas in Tamil and chakotra in Hindi-speaking states. Nepalis call it bhogate.

The Encyclopaedia of Cultivated Plants: From Acacia to Zinnia says that essential oils from the pomelo peel are used to flavour soft drinks and in aromatherapy.

Inside the peel is naringin, a chemical 1.5 times sweeter than sugar.

The combination of the oils and the sweet chemical makes the peel a tad bitter, which is why it is used to cure stomach infections.

The same encyclopaedia mentions that pomelo is rich in pectin. This along with high levels of potassium is believed to clear arterial deposits in the body and lower the risk of heart ailments. The fruit also lessens the risk of lung cancer, even in smokers. The high content of Vitamin C and flavonoids makes it a good antioxidant that fights cancer.

Mokhampur in Dehradun produces pomelo in abundance. During a recent visit, I learnt from the people there that they make pickles, chutneys and salads out of it. But they relish it most with a few chopped onions mixed with green coriander chutney and paired with either roasted peanuts or pakodas.

Jambura makha is a delicacy among the Bengalis and is a favourite in the Northeast too. Pomelo forms an essential part of the prasad served in Durga puja in West Bengal and Assam. It is also offered to the Sun god during chhath puja in Bihar.
Print edition Print edition Nutrition Nutrition Medicinal Plants Medicinal Plants India Health Fruit Food Down to earth Citrus Citrus Citrus
SUPPORT US