FT goes into a Shell 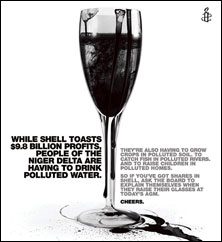 Aleading economic daily in the UK developed cold feet at the last minute about an ad hostile to the oil company Shell.

The refusal by the Financial Times has outraged the UK branch of Amnesty International. The ad was due to appear in the third week of May to coincide with Shell’s annual meeting in London.

The ad accuses Shell of an appalling human rights record in Nigeria. Tim Hancock, Amnesty International UK’s campaigns director, said, “The decision by the Financial Times is extremely disappointing. We gave them written assurances that we would take full responsibility for the comments.”

Other British dailies The Metro and the Evening Standard had no problems running the ad. But a Financial Times spokesperson said Amnesty had given assurances that it would take responsibility for the comments, but “it beca me apparent that Amnesty’s lawyers had not had a proper opportunity to advise Amnesty on those opinions”.