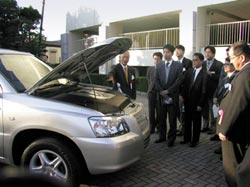 The alternative energy industry is stepping on the gas. Top automakers have joined hands to deve-lop fuel cell technology for cars, enabling them to cover similar distances as gasoline-run cars. The Japan-based effort has brought together Toyota Motor, Nissan Motor, Daimler-Chry-sler ag, Ford Motor and several other automobile and component manufacturers.

The group aims to extend the distance fuel cell vehicles (fcvs) can run before refuelling to 500 kilometres (km) by increasing the fuel storage capacity of the cars. Toyota and Honda simultaneously launched the world's first fcvs recently, but the drawback is that the auto-mobiles can cover only around 300 km before refuelling. The consortium will aim to develop fuel tanks that can hold 40 per cent more high-pressure hydrogen.