A Canadian firm has given a fresh lease of life to defunct fuel cells which have been modified to produce enough electricity to run a home or even to power buses, which would spew out water vapour instead of toxic fumes 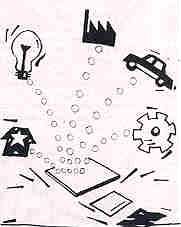 FROM this year, Chicago (us), will start using three prototype buses powered by fuel cells of a type which were aban- doned after the Gemini space pro- gramme in 1996, but resurrected by Ballard Power Systems of Vancouver - a small Canadian firm of engineers. The only thing coming out of the exhaust pipes of these buses will be warm water vapour. What a marvellous use of a spin-off from space!

A fuel cell is a bit of clean technology that does not involve burning. In its ideal version, you just mix hydrogen and o~gen together and get water, heat and a lot of electricity. There is plenty of oxygen on Earth and hydrogen -the one element the universe is not going to run out of and no one ever com- plained about water as a pollutant.

The late Isaac Asimov had said that if fuel cells ever worked properly, they would make smallscale electricity pro- duction unprecedentedly cheap and clean. The first fuel cell was invented by Sir William Grove, a London barrister, in 183e9.There are now four or five dis- tinct types of fuel cells.

An alkaline version provided power and water for both the Apollo pro- gramme and space shuttle ill 1968-69, but the one that has most interested Ballard Power, according to the Guardian Weekly, is called a PEM (proton exchange membrane). It consists of a 'solid' electrolyte -sulphuric acid bon~ed to teflon -with a carbon cathode and anode, each having a platinum catalyst on the inside. When hydrogen is provided to the cathode and oxygen from the air to the anode, we get electricity.

The latest version is a cell less than half-a-millimetre thick. In its most basic form, it is a piece 'of clear poly- mer in a channelled graphite sandwich -to allow the passage of hydrogen or methanol to the PEM -and' it produces 250 amperes. This is enough to look after an average home's needs, but the voltage is very low. The voltage can be increased by stacking the cells together.

It has been ~stimated that a cubic foot or so (0.03 cu metres) of these sandwiches can generate 28 kw, and a tightly bound stack of these is sufficient to supply 200 kw to a city bus and keep the bus running for 400 km. According to Ballard Power, it will deliver the same top speed and hill-climbing capability as a diesel-powered bus, but the ,acceleration will be better.

Chicago can thus have fuel cell-powered buses which can be refuelled at a central point in 11 minutes as opposed to the other kind of electric bus, which might take eight hours to charge.

If engineers can succeed with another technology called 'regenerative braking', which can recover energy from the effort needed to stop a :vehicle, and put it back into the system, Chica~o , may soon have a bus capable of runn- ing 560 km on a fuel tank full of hydrogen.