What is poverty? The Planning Commission is set to undertake an exercise to find a quantifiable answer to the question. It has proposed to the Union government to set up an expert group to redefine poverty and, consequently, reassess the percentage of India's population living below the poverty line. The last such revision was done in 1993 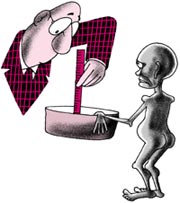 what is poverty? The Planning Commission is set to undertake an exercise to find a quantifiable answer to the question. It has proposed to the Union government to set up an expert group to redefine poverty and, consequently, reassess the percentage of India's population living below the poverty line. The last such revision was done in 1993 (see box: Evolving concept). But that was predominantly confined to removing regional imbalances in the calculations.

Sources in the commission say the official clearance for the proposal is a mere formality and the process would get underway soon. The expert committee will be chaired by Planning Commission member S P Gupta and B S Minhas, who is secretary in the Union ministries of small-scale industries and agro & rural industries. It shall comprise seven other economists, including S Tendulkar and K Sundaram, faculty members in the Delhi School of Economics, and Abhijit Sen of the Centre for Economic Studies and Planning, Jawaharlal Nehru University, New Delhi.

The official definition of poverty has always been a subject of contention among economists. During the past decade of liberalisation, the debate has only intensified. "The definition we use now to calculate the number of poor living below the poverty line has its origins in the economic research carried out in the 1970s. The world has moved on and we must look at the issue afresh," feels Gupta.

The commission currently estimates the incidence of poverty at the national and state level on the basis of household consumer expenditure surveys (see table: Poverty incidence). These studies are conducted by the National Sample Survey Organisation (nsso) at an interval of approximately five years. The poor are defined as those who lack command over basic consumption needs, including food and non-food components.

The poverty line is obtained by specifying a consumption bundle considered adequate for basic consumption needs, and then by estimating the costs of these basic needs. The commission bases the calculation on a minimum calorie intake associated with a fixed consumption basket.

The present method has been criticised on several counts. "The commission itself believes the existing data on poverty incidence is not comparable over time," concedes Gupta. Other critics observe that the calculation of poverty line does not capture the intensity of the problem. It also does not take into account the complexities of distribution of wealth. Besides this, functional glitches have arisen due to changes in the methodology of nsso surveys.

Kanchan Chopra of the Institute of Economic Growth, New Delhi, says: "The debate about defining poverty has matured. If India is to redefine poverty it must include five components -- material resources, health, security, freedom of choice and social relations -- in its process of calculation."

How far beyond the old economic models the plan panel will venture is anyone's guess. Already there are apprehensions that the Union government will not be too interested in the matter in the next few months owing to the likelihood of an early general election. But the exercise, however prolonged, shall definitely see several divergent views being thrown into the computational cauldron of poverty statistics.
News News News Statistics Statistics Small Scale Industry POVERTY & ENVIRONMENT Poverty Economy Web edition Web edition Uttarakhand disaster Rudraprayag district … Pithoragarh district … Food and relief … Down to earth Dilip Jawalkar
SUPPORT US